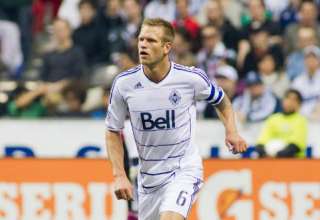 When Jay DeMerit was introduced as one of the Vancouver Whitecaps’ marquee signings, the flashbulbs went off and the cameras were in his face. Many column inches were dedicated to the arrival of an American national-teamer to Canada’s newest MLS city.

But, a decade ago, you wouldn’t have like the chances of DeMerit even getting a sniff in Division-2 soccer. He was an unheralded player coming out of college with no pro prospects.

Armed with nothing but a few bucks and a heck of a lot of guts, he went across the Atlantic to try and make a name for himself. That journey is at the centre of Rise and Shine: The Jay DeMerit Story, a documentary by Nick Lewis and Ranko Tutulugdzija. The latter was a former teammate of DeMerit’s at the University of Illinois at Chicago.

The film is complete, but it can’t be shown. (Even though you can check out the trailer, below). The filmmakers need to raise approximately US$215,000 in order to secure the rights to game footage, music and promotions.

DeMerit played in the Premier League with Watford, but archived Premier League footage costs, gulp, $20,000 per minute. And the film just can’t work without game footage. Money has to be paid to the national federations if they use footage of DeMerit playing for the U.S. national side.

So, as more and more artists look to fans to finance their projects, DeMerit and the two filmmakers are taking it a step further. They doing a little more than simply reaching out to fans to help fund the project. So far, a total of 437 fans have pledged US$51,374 (as of the morning of May 25) to help get the film ready for distribution. But they will be guaranteed merchandise from the movie, soccer gear or even autographed memorabilia depending on how much they spend.

But Lewis insists that this isn’t a film about a U.S. national team player, or even a soccer story. It’s an inspirational film about not giving up on a dream, one that will speak to a wide audience, no matter what kind of passions the viewers have.

“Jay has said that it’s not about him; it’s about the story and the journey, and how got there,” said Lewis. “This film is not pro-Canadian or pro-American; it’s for anyone who has a goal and a dream.”

DeMerit isn’t just the subject of the film. He’s actively promoting it and helping attract people to fund the project. DeMerit and the filmmaker don’t want the “backers” to think of themselves as people who are simply donating funds to a cause. Depending on how much money is spent, the backer can get DVDs, Blu-Rays, shirts designed by DeMerit, prize packs from Puma and autographed gear. The top-level backers can train with DeMerit for a day in Vancouver. For more on how to support the film, click HERE.

“What we have is a finished film. Be we can’t screen it to a wider audience until we secure the footage from the Premier League and World Cup,” said Lewis.

DeMerit went to University of Illinois at Chicago. After finishing his collegiate career, no MLS team was interested. But, he wouldn’t accept his playing career was over. He decided to go to England and try to impress whatever coaches he could. He was able to get an EU passport through his Danish lineage. He hooked on with a club in what we’d consider the ninth division, well beyond the realm of even the Blue Square Premiership. He was making 40 pounds a week playing soccer, so he also worked cleaning attics. He went to division seven. But, thanks to some fortune, he got a tryout at Watford, stuck and eventually got the captain’s armband. At 27, he finally suited up for the U.S. national team. He played in last year’s World Cup.

In 2006, DeMerit enshrined himself in Watford’s history by scoring the opening goal in a 3-0 win over Leeds in the Championship playoff final. The win earned Watford promotion to the Premiership.

When DeMerit came left North America, he was a player that no pro team wanted. When rumours began to swirl that he was coming to MLS, it was clear he was going to be a high-profile signing.

“The reason he went to Europe was because there wasn’t any interest in him from anyone in MLS,” said Lewis “Now, he’s come back and he’s welcomed like a star.”

(Ed. Note: The 11 has become a supporter of the film. We will continue to update our readers on the progress that’s being made. This is the kind of story that should inspire young soccer players, no matter where they play.)