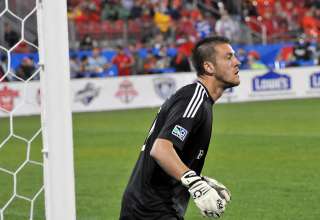 The battle between the teams with the two worst records in MLS wasn’t close.

Toronto FC looked worn out in a 3-0 road loss to the Philadelphia Union, Sunday afternoon. The Reds lost individual battle after individual battle, gave the ball away cheaply and the Union regularly got its attackers round back of the TFC defensive four.

For the third game in row, Paul Mariner started the same XI. And, with games being played weekend-midweek-weekend in sweltering heat — part of the packed July schedule — the players looked like the physical demands were simply too much. A successful team has to rotate the squad through the hellish July schedule, when games are often played in temperatures in excess of 30 C. But TFC has been holding steady with its lineup, and paid the price.

With the win, the Union surges seven points ahead of TFC in the worst-record-in-the-league race — and went past FC Dallas. Now, FC Dallas is the team closest to TFC, six points ahead of the Reds, who are at the foot of the league table.

The Union, like Toronto, has shown signs of life with a coaching change. Under new coach John Hackworth, the Union has been getting results and scoring goals. And the Union dominated possession right from the get-go, with much of the first half played in the final third.

The busiest player for the Reds was keeper Milos Kocic, who was called on to make a diving stop on Gabriel Farfan, then collided with Union forward Jack McInerney in the box after a ball was slid to him by Freddy Adu, who danced through the TFC defence.

McInerney, working down the right wing, caused major issues for the TFC defence. And, he created the first goal, getting behind the back line, then squaring a ball for Gabriel Gomez. Richard Eckersley, once again playing in the centre of the defence, slid over to try and block Gomez’s shot, but got just enough to deflect the ball into the corner of the goal.

In the 36th minute, two minutes after the opening goal, Adu and Farfan caught TFC right back Jeremy Hall asleep at the wheel. Hall was in the middle of the park, not out on the wing, and Farfan was unopposed to collect the ball wide and then slide the ball to Adu, who beat Kocic low.

TFC had no new life in the second half. It began with a slow, lazy pass from Torsten Frings that was intercepted and then played out to McInerney, who turned TFC defender Logan Emory inside out, then slotted a ball into the middle that eventually feel to the feet of Adu, who placed his shot just wide.

Emory’s day of misery wasn’t over. Subsititute Antoine Hoppenot blew by him on a through ball and then scored Philly’s third of the match. While Emory is the easy target, Hoppenot was played onside by Eckersley, who was well behind the rest of the line, slow to get back into position.

The insult to injury came right before the final whistle was blown. TFC striker Danny Koevermans had a chance to score in his sixth consecutive game. But his volleyed attempt to give the Reds a flattering consolation goal was cleared off the line by Union defender Sheanon Williams.

With another match coming Wednesday against the defensively stingy Vancouver Whitecaps, we will see if Mariner makes some changes to the starting lineup.