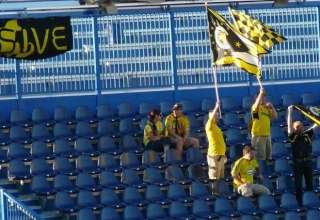 Playing against their demonstrated tendencies, the shorthanded Montreal Impact, 2-6-0 in their last eight games, snapped a three-game losing streak a with a 3-1 victory over the seventh-place Columbus Crew, picking up the victory despite the absence of first-string central defenders Nelson Rivas and Matteo Ferrari to injury and midfielders Davy Arnaud and Felipe to league disciplinary measures.

“The guys deserve all the credit tonight because on the field they dug in and wouldn’t let this one slip and we got a desperate three points,” said head coach Jesse Marsch, who had nothing negative to say about the officiating this evening after being fined by the league following the last two games for offering his assessments of the officials’ work. “It’s something that we’re going to use as a big momentum piece moving forward.”

The host team spent the bulk of the first 45 in the Columbus end of the pitch as it repeatedly attacked the goal area without any ultimate success, its every attempt thwarted or smothered by a team tied for the stingiest defensive in the league, having allowed 15 goals in as many games.

Justin Mapp got things rolling for the Impact, tearing up the right flank in the eighth minute, crossing the ball to Sanna Nyassi, who, as has been the case all season, failed to finish the play, rolling the 10-metre shot wide of Andy Gruenebaum’s net.

Defender Zarek Valentin had the Impact’s second good chance in the 26st minute of play. Twice in the clear up close and in position to launch the ball goalward, the Lancaster, Pa. native chose to pass the ball the first time and later had his shot from the edge of the six metre box blocked.

A Mapp cross in the 28th just missed connecting with Marco Di Vaio. In the 38th, Patrice Bernier played a through ball for Nyassi, who had his shot deflected high. Moments later Collen Warner sailed the ball over the woodwork and Di Vaio put a free kick just over the right hand corner of the goal frame.

As the clock worked its way toward the interval, Warner, showing strong technique, outfoxed two opponents and sent the ball towards Lamar Neagle who was unable to capitalize on the service. In added time he came close to opening the scoring once again but defender Chad Marshall’s two-footed slide resulted in another ball over the bar.

The second half continued the pace and form set out in the first, with Montreal attacking and Columbus competently deflecting the offensive forays as the Impact’s DP, Marco Di Vaio came to the forefront.

The Italian striker centred a pass to Neagle, who headed it over the horizontal bar in the 49th minute. In the 50th Mapp had two shots blocked in close and Di Vaio sent a through ball in for Nyassi but he was deemed offside.

Doing everything but putting the ball into the net, Di Vaio found an overlapping Jeb Brovsky on the left side in the 57th minute but the defender was unable to get the ball to Nyassi, his cross blocked before it reached the Impact forward’s boot.

Mapp then sent Di Vaio in alone but a pair of converging Crew defenders nullified that threat.

The Crew was awarded a corner kick in the 64th minute, with Nemanja Vukovic taking the kick. It found Milovan Mirosevic in front of the Montreal net and the Chilean forward headed it home to give his team the lead and deflate the until-then noisy and enthusiastic crowd of 15,116. A noticeable pall fell over Stade Saputo as once again, the Impact seemed to be on their way to another home loss.

While the fans were dejected, the players they came to support were not daunted by the setback.

Valentin got his first MLS goal in the 78th minute to tie things up and bring the crowd back to life. Di Vaio originated the play – one that saw him locate and get the ball to Nyassi who then got it to Valentin at the top right hand corner of the penalty area. The 21-year-old defender drove it into the mesh behind Gruenebaum to tie things up.

Coach Marsch offered his impression of the tying goal.

“At halftime that was one of the things we talked about – trying to be aggressive with our outside backs because when they pinch in if those guys can be more aggressive with their timing to get forward it can turn it from being a cross to a shot. That’s exactly what happened tonight. He was far advanced, the timing of the play was good and instead of being a cross from the wide side it was a shot from inside the box and it got us a goal.”

In the 88th minute, Patrice Bernier, wearing the captain’s armband due to Arnaud’s suspension, was awarded a penalty kick after a foul was called on Columbus midfielder Chris Birchall in the penalty area.

Feinting a shot before actually striking the ball, Bernier gently rolled it into the lower left corner of the net for a lead that the Impact managed to hold on to for the rest of the evening.

The Impact’s next game is on Saturday in Philadelphia.

THROW-INS – With 17 goals registered against them in 16 games, Columbus is tied for the title of stingiest team in MLS. Crew midfielder, Eddie Gaven, appeared in his 250th MLS game this evening while teammate, defender Sebastian Miranda, played his 50th

• The Impact traded Bobby Burling, a midfielder chosen in the MLS Expansion Draft but who never set foot in Montreal, to Chivas USA, receiving an international roster slot for next season in exchange.

• Today’s game celebrated the tenth anniversary of the Ultras, the Impact’s hard-core supporters with whom the club has had a sometimes rocky relationship. The group unfurled a huge triptych commemorating the occasion that covered not only their designated section but the adjacent ones as well.