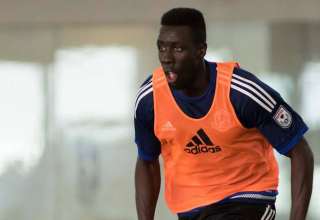 It feels like every other team in NASL has been in camp for weeks, yet FC Edmonton just began its on-field sessions on Monday at Commonwealth Stadium.

So, are the Eddies behind the rest of the NASL when it comes to preparations for the 2015 season? Coach Colin Miller doesn’t think so. He says that his players came into camp in shape — and there’s a risk of starting camp too early and burning players out.

“In the past, we’ve had an eight-week preseason, and the players complained about it,” said Miller.

This year, the players and staff will have just over a month to get ready for the April 4 season opener at Jacksonville. The Eddies will travel to Florida in late March and play all three of that state’s NASL teams in a series of friendlies before the games begin for real.

Miller said the reason so many of the other teams got off to early starts is simple.

“They want to accommodate the MLS schedule so they can schedule friendlies against MLS clubs,” he said. Because MLS is set (barring a labour interruption) to kick off in March, a month ahead of NASL, MLS camps opened in January. So, Miller believes NASL clubs are willing to add weeks to their training camps just to they can synch up with MLS clubs.

And, former Toronto FC forward Johann Smith will be in the Eddies’ camp for the next three weeks. The American speedster played for the Reds in 2008 and ’09, and was also once part of Bolton Wanderers’ roster.

“He has a terrific attitude,” says Miller. “And he runs faster than I can drive my car. We are going to give him an opportunity; he also had English Premier League experience.”

As well, Canadian Hanson Boakai is in camp, after spending several weeks in Spain training with Deportivo La Coruna. FC Edmonton says Boakai’s time there was strictly as a training /fitness exercise, as he recovered from injuries and the CONCACAF U-20 World Cup qualifiers.

Boakai said he was nursing injuries throughout the U-20s, and he couldn’t risk starting games for fear of turning minor problems into major issues. At the CONCACAF tournament in Jamaica, he became coach Rob Gale’s super sub, but wasn’t used in the loss that eventually eliminated Canada from contention.

Boakai says training in Spain was a lot different than his experiences in Germany. In 2014, the teenager trained with Fortuna Dusseldorf.

“It was good for me, the Spanish play more my kind of style,” said Boakai. “In Germany it was a lot more physical. In Spain, it’s about playing with the ball in tight spaces, it’s about keeping the ball.”