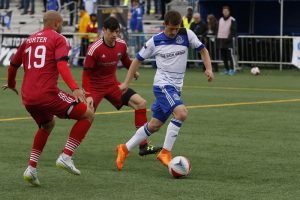 If FC Edmonton beats the red-hot Fort Lauderdale Strikers on Sunday, the Eddies will finish one point back of the team that wins the spring-season title (which team that will be is still up for debate, though it will take massive goal differential swing to topple the New York Cosmos from the top).

The Eddies will play their 10th game of the season on Sunday. So far, they’ve only scored seven goals. But, because they’ve only surrendered six, the team has a winning record and is closer to the top of the standings than the bottom. But, everyone with the club understands that more goals need to be scored; and, through the last two weeks, the club has been working on its attack.

“The guys are aware of it; it’s not like we’re focused solely on defence in training,” said FCE coach Colin Miller after Wednesday’s training session at Clarke Field. “We balance the week, so maybe the first couple of sessions maybe on the defensive shape of the team, and what the individuals’ roles are. The rest of the week is on attack. But, all of last week, because we had a bye weekend, everything was geared towards going to goal. Same thing this week. We’ve kept that mindset and that focus on attacking principles. And it’s been very good.”

This year, striker Jake Keegan has two goals; forward Daryl Fordyce has one. Striker Tomi Ameobi has yet to score. Jason Plumhoff, off the wing, has a goal this season. The other three goals the Eddies have scored in NASL play have come from defenders. Heck, with two goals, centre back Pape Diakite is tied for the team scoring lead.

“Any time you’re not scoring, at least over a goal per game, it’s frustrating,” said Keegan. “For the most part, apart from the first three games, we’ve been scoring just enough to win games. Obviously in Miami (the loss that eliminated the Eddies from the spring-season title race) we didn’t get it done.”

Keegan said that the Eddies need to improve their odds of scoring; and that means creating more chances. You’re never going to up the field and score with every good look you get at the opponent’s goal. The way to ensure that you do score is by creating pressure and multiple chances.

“We need to create more chances,” said Keegan. “Yeah, we’ve missed a few — but you’re not going to score on every chance you get. The bottom line is we need to create more chances, we need to provide better service for whoever is playing up front, the wingers, whoever it is. When you get into a rhythm as a striker, that’s when you start scoring. It’s not when you get one chance in a game, and three games later you get another chance.”

While Edmonton is known as a counter team, Keegan said certain teams in the league drop so deep defensively that they don’t offer the opposing teams the chance to turn on them. Keegan said that Carolina and Ottawa are perfect examples of teams that don’t take risks, so they aren’t very susceptible to being counterattacked. So, in his mind, the Eddies have to do more when it comes to breaking down the opposition; they will need to work against a set defensive shape.

The Eddies were without midfielders Nik Ledgerwood and Dustin Corea, who are on the way back to Edmonton from national-team duties with Canada and El Salvador, respectively. Both will be back in the mix for Sunday’s match.

And the Strikers will be a handful. They are undefeated in their last five NASL outings, winning four of them.

“They’ve looked very dangerous,” said Miller. “I’ve watched them against the Cosmos, I watched them against Ottawa (both were Strikers’ wins). They get bodies back behind the ball, and anytime Maicon Santos is on any team, he has the qualities that made him a star at one point in MLS. So, we know we’ll have to be on our toes. They have a different dynamic to them. They have a bit of Brazilian flair, they also have a bit of aggression — and the two games I’ve watched them, they have a street-wiseness about them. By that, I mean they can ruffle a few feathers, there are certain aspects of their play that I wouldn’t promote, for sure. But we will have to be at our best on Sunday.”