August 01, 2021
9 New Articles
Home NASL & USL Ottawa Fury Whitecaps storm back, but Tornaghi’s save on MDJ was the turning point 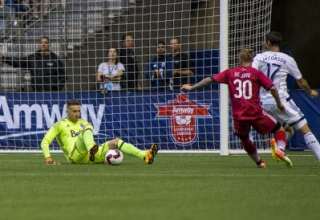 For Vancouver Whitecaps supporters, it would be easy to look at Wednesday’s 3-0 triumph over the Ottawa Fury and point to a series of positives.

The Whitecaps, down 2-0 after the first leg of the Amway Canadian Championship semifinal, drew level at 20 minutes thanks to a Pedro Morales penalty and a Nicolas Mezquida header. Whitecaps’ 15-year-old winger Alphonso Davies put Fury fullback Lance Rozeboom in his pocket. Davies made us ooh and ahh when he razzle-dazzled a couple of Fury defenders and struck a shot off the post. And, of course, Octavio Rivero’s well-placed second-half shot was the margin of victory.

But, the biggest moment of that second leg at BC Place, the moment which sent the Whitecaps on a path towards the Voyageurs Cup final against Toronto FC, came with about seven minutes left in the first half. Ottawa’s Marcel de Jong got behind the Vancouver defenders and got a clear sight of goal. ‘Caps keeper Paolo Tornaghi scrambled off his line and stopped de Jong’s attempt, point blank.

That was the defining moment. It was 2-0 at the time. Had de Jong scored a road goal, he would have effectively erased the two goals the Whitecaps had put on the board. Had the Fury got that goal, the Whitecaps would have needed to score two more to win.

Who knows how the game would have developed had de Jong had scored? Had the ball gone in, it would have been 2-1, and Ottawa would have had the momentum. Would the Whitecaps found yet even another gear and scored a bunch? Or would they have still only got one more, which wouldn’t have been enough to go through?

One thing is for sure, had de Jong put the ball past Tornaghi, the game would have changed. The tie would have taken on a completely different complexion.

And that was the turning point. And if anyone deserves a match ball, it’s Paolo Tornaghi.