January 24, 2022
9 New Articles
Home NASL & USL FC Edmonton Eddies not sure if unexpected weekend off will hurt or help the Rowdies 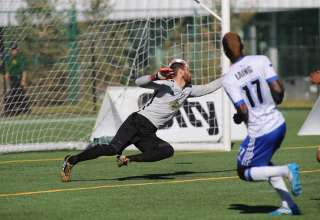 As FC Edmonton trained Thursday at Clarke Stadium, a winter wind whipped across the field. There were a few snow flurries in the air. The thermometer read 1 C, but the wind made it feel much colder than the freezing mark.

Forward Tomi Ameobi said it was much colder than at any time during the time he played professionally in Iceland.

It won’t be that cold on Saturday, when the Eddies are in Tampa Bay to face the Rowdies, who they defeated at Clarke Stadium just two weeks ago. The stakes are high; the Eddies are six points behind Carolina for the fourth and final post-season spot — based on the overall standings. But Tampa is just one point behind the Eddies, with two games in hand. Fort Lauderdale is one point ahead of the Eddies (in fifth place) with a game in hand.

So, you could argue that the Eddies need to beat Tampa away and then make sure to beat Carolina at Clarke Stadium two weeks from now to remain in the chase.

The game in Tampa will offer an interesting contrast; leading up to a game in Florida, the Eddies have been training in icy Alberta conditions. Meanwhile, the Rowdies had last weekend’s scheduled match against Fort Lauderdale postponed — so they may be rusty (or well-rested, depending on your perspective).

“I don’t know how it will work for them,” Ameobi said off the Rowdies’ unexpected lay-off. “But, I know, as a footballer, all you want to do is play games. So, whether they will be 100 per cent sharp or not, we’ll see. If you ask any player, they’d rather play games than train.”

FCE coach Colin Miller said having that extra week off, like Tampa Bay did, can be both good and bad.

“There’s a bit of both there, to be honest with you. They may have had one or two injuries that they’ve now had the opportunity to get back. I am sure they have had an intrasquad game of some sort, to keep things ticking like we certainly would have if we had inclement weather here. Personally, I think if you continue to play, it keeps the rhythm going. The fact that they had a break may work against them, there may be a bit of rustiness there. It may take a while till they get their legs going so we have to be jumping all over that.”

Two games ago, the Eddies beat the Rowdies 1-0 on a goal from Lance Laing.

“We played well against them, they created some chances — if I remember right — late on in the game because they were throwing bodies forward,” said Miller. “I actually read my report last night and it wasn’t until later on in the game where they created one or two chances, but they were more the result of us going to sleep a bit defensively.”

The Eddies’ draw against the Cosmos last weekend allowed Carolina — who beat Indy — to add a couple of points to its lead over FCE. But Ameobi said that his team still feels the gap can be made up.

“I don’t think we could have a better run-in,” said Ameobi. “We play all the teams that are around us (in the standings). Whoever is the best team will get in.”