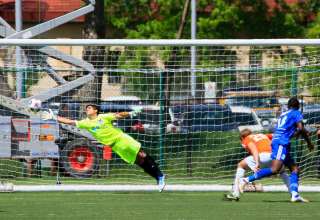 Tomi Ameobi (18) watches as the ball he got his head to goes past the outstretched arms of Carolina keeper Akira Fitzgerald. PHOTO: FC EDMONTON/TONY LEWIS

The Eddies scored six on Sunday. Daryl Fordyce scored 34 seconds into the match, the fastest goal from the start of a game so far this NASL season, and the Eddies were on their way to a 6-1 hiding of the Carolina RailHawks.

What a way to win your first league home game of the season — in attempt No. 4, the final match of the NASL spring season. Minnesota won the spring season title on Saturday night.

Fordyce had a hat trick; while Tomi Ameobi and Lance Laing each scored. At the death of the match, after a bizarre handball in the box, teenager Sadi Jalali got his first ever professional goal from the penalty spot.

“It’s been a disappointing season so far,” said Fordyce. “We know we’re a good team, and we showed it today.”

“The results have been unfair to us so far,” said Laing. “Everyone who has come out to watch us train, to see how hard we work, they know that we should be better in this league.”

“It wasn’t about getting out frustration, it was about everything clicking,” said right back Edson Edward, who set up Fordyce’s half-volleyed hat-trick goal with a nice cross. “You could see that everyone was confident on the ball. We all just wanted to play, we weren’t thinking defence-first. We just wanted to play soccer.”

Coach Colin Miller made one major change to the lineup, moving Lance Laing from left back to a left-wing position. He slid Kareem Moses into the left back slot, with Mallan Roberts able to return to the centre back position after serving a two-game suspension.

The decision to move Laing off paid off immediately. Just after the kickoff, Laing went on an unopposed 45-yard run up the wing, then made a perfect cross to Fordyce, who made a run up the middle of the penalty area that no on the RailHawks picked up. At the 34-second mark, it was 1-0 to the Eddies.

“We fell asleep,” RailHawks coach Colin Clarke said at halftime. “We can’t give up goals like that on the road.”

It was 2-0 inside the 13-minute mark, as Ameobi headed home a Neil Hlavaty free kick.

Laing then made it a three-goal lead. After a free kick, he stepped inside RailHawks midfielder Nazmi Albadawi. As Albadawi held his head in his hands — in embarrassment for allowing Laing to skip by — the Eddies left winger smashed a shot inside the post.

“I did see him,” Laing smiled. “I just turned in. And I have a hard shot, you guys know that, and that’s what happened.”

Just before halftime, Albadawi gave the ball away to Ameobi; it was then played up to Fordycde, whose shot deflected off RailHawk Austen King and looped into the net.

The Eddies could have made it 5-0 early. After a Carolina corner kick was foiled, Laing went on an unopposed 65-yard run up the left side, then crossed for Ameobi, who had got in behind the Carolina defenders. Goalkeeper Akira Fitzgerald made a tremendous save, coming off the line.

Carolina did get a goal back in the 73rd minute, as Connor Tobin, the right back, tried to make up for being consistently schooled by Laing. He tapped in a cross from former Toronto FC draft pick Mike Grella.

But, a minute after scoring, Carolina allowed FCE’s fifth goal. Edward was out wide and crossed in for Fordyce, who hammered a half volley across the keeper and into the corner of the goal.

“I wasn’t surprised that we had so much room to cross,” said Edward. “I know from coming here as an opposition player that coming to Edmonton and playing on Sunday afternoons isn’t easy. You don’t want to be here.”

And, right before the game ended, King, alone in the penalty area, stuck out his arm to handle a ball that offered zero danger. The bizarre handball allowed Jalali to score for the first time in his FCE career, as he rolled home the penalty.

With the Laing experiment coming off so well, will that mean more of him on the wing, and less at fullback. He said that after the game, he talked with Miller and said “I’m not going back to fullback.” Of course, he said it with a big smile on his face.

“Personally, I’m pretty attack-minded. Playing fullback is a bit too defensive for me. Now, I get the chance to go forward.”

Only one negative to report for the Eddies: Teenager Hanson Boakai was dropped from the team as he was late showing up to the stadium, on a game day. He got to the field less than an hour before game time.