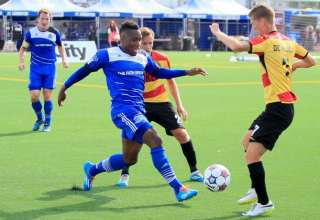 Eddie Edward is seen in action from a game against the Fort Lauderdale Strikers. PHOTO: FC EDMONTON/TONY LEWIS

Tickets are 97 per cent sold for Sunday’s match. FC Edmonton’s front office reports that there are just “100 to 150” tickets left for sale. And, for the first time this season, ESPN3 will simulcast a broadcast from FC Edmonton’s crew.

FC Edmonton will be on its biggest stage of the season (at least when it comes to a home game) this Sunday when it hosts the Tampa Bay Rowdies. And, coming into the weekend, it is just four points out of fourth place in the NASL overall table. Securing a fourth-place spot would mean a berth in The Championship — the league’s official brand for something most of us refer to as “playoffs.”

The Eddies have seven games left to make up that four-point gap. Four of those games — including three of the next four — are at Clarke Stadium. And, one major advantage the Eddies have over the field is that they are done with the league’s top two teams — Minnesota United and the San Antonio Scorpions — on the schedule.

But, not so fast. Coach Colin Miller said the one thing that the NASL has proven this year is that it has been wildly unpredictable. For example, last week, Tampa Bay hosted Ottawa, and lost. It was just Ottawa’s second win of the fall season. In the fall season standings, third through ninth is separated by, ahem, a whopping five points.

“The league has been just tremendous this season,” said Miller. “You can’t look at any game and say that is a sure three pointer.”

Right back Eddie Edward agreed. He said that, even though the Eddies don’t have to face the Loons or the Scorpions again in the regular season, that the team knows that “anything can happen” in the upcoming matches.

“That’s why it’s important like we play every game like we’re playing against those top teams,” said Edward.

Edward had a little stint in midfield during training Thursday. While he’s usually the Eddies’ right back, he played in midfield against the Montreal Impact in the Amway Canadian Championship. Where Edward might play on Sunday could depend on several players who are game-time decisions in terms of their health. Miller wouldn’t say which players are walking the fitness-test tightrope — as coaches are going to play it close to the vest as the games wind down and the stakes are higher. But we do know that keeper Lance Parker, midfielder Ritchie Jones and striker Daryl Fordyce all missed last weekend’s game against the Indy Eleven. So, with several players as question marks, the team does need to experiment in training to be ready for a variety of possibilities.

One thing is for sure; strike Frank Jonke is out. He suffered a concussion last week in Indianapolis and was not on the practice field on Thursday.

The Eddies officially sold out their home opener against the Cosmos, but there were many no-shows on a blustery evening. With temperatures expected in the mid-20s C this weekend, the conditions are good for this to be the biggest crowd of the season at Clarke.