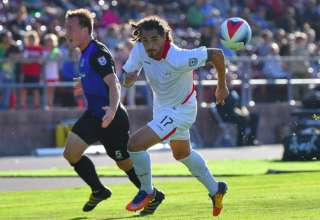 If FC Edmonton could consistently press and play with the confidence that it showed through the final 45 minutes of Saturday’s NASL match in San Francisco, well, there would be some promise as we head into the final month of the regular season.

But, the problem was the first half of play. The Eddies were down 2-0 — and, if not for a series of wasteful “finishes” from Deltas striker Pablo Dyego, should have been trailing by more. The pit that the Eddies dug for themselves was simply too deep from which to escape, and Dustin Corea’s headed effort could only serve as a consolation in a 2-1 loss.

The Deltas started the game with three Canadians — Maxim Tissot at left back, Kyle Bekker in midfield and Karl Ouimette in the centre of defence — in keeping with Eddies/Deltas as the league’s unofficial Canuck Derby. The home side began brightly, and the Eddies — as we’ve seen many times this fall season — struggled to get into top gear in the early stages.

Just over a minute in, and a defensive throw-in got past central defender Albert Watson. Dyego stole in, got the ball and went in on goal — and slammed his effort well wide.

In the fifth minute, Eddies’ keeper Tyson Farago had to be alert to keep out a couple of speculative set-piece efforts in a row after Dyego was brought down by defender Netan Sansara, which began another spell of Deltas’ pressure.

Dyego then had another great chance after he dashed by Watson… and, once again, he went well wide with his effort.

The Eddies’ resistance lasted only 14 minutes. Delta Devon Sandoval chipped a ball into the middle of the penalty area, and Bryan Burke beat FCE fullback Pedro Galvao to the ball — and headed home.

“We should have been down 3-0 after 15 minutes,” admitted FCE coach Colin Miller. “We did so many things that were out of character, like letting the ball bounce and allowing people to get past us.”

The slow start bemused Miller, who said “we had our pre-match meal, our game preparation was there, we looked fine in warm-up. I can’t explain why we started like we did.”

Dyego had yet another chance to score which he wasted, but the Deltas got their second goal when Burke’s low cross was deflected by Watson into the roof of his own goal. The Deltas missed so many chances, and the Eddies then put one in their own net.

The Eddies did get the ball across the Deltas goal line in the first half, but Sainey Nyassi was well offside before he put it in.

When the teams got in at halftime, Miller said he didn’t yell, that the team simply “had to sort things out.”

While the Deltas had a great chance early in the second half, with Reiner Ferreira blasting just wide, the Eddies grew into the game.

At the one-hour mark, FCE created a couple of great chances in short order. Sadly for the Eddies, the end results were just like Dyego’s first-half efforts; they got into great positions to score, but didn’t trouble the keeper.

Daryl Fordyce got a great chance, but his effort was deflected and went wide.

Then, Nyassi made a brilliant run down the left wing, skipping past San Francisco defender Greg Jordan. He then laid the ball off into the penalty area for Ben Fisk, who had just come in off the subs’ bench. But Fisk’s shot off the instep was well off-target.

Had the Eddies been able to hit their marks, despite being outplayed for most of the match, they could have drawn level at 2-2 by the 70-minute mark.

Deltas coach Marc Dos Santos said after the match that his team was “complacent, overconfident” and admitted fatigue may have been a factor. His side played in New York Wednesday.

Finally, the Eddies got a goal in the 80th, with Corea beating Tissot in the box. But, despite having three corners in a row and a free-kick from just outside the box in a furious, finally flurry, the Eddies couldn’t find the equalizer.