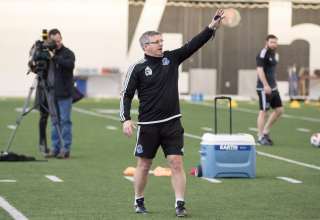 The Eddies are a little bit stir crazy.

Except for a few days spent on a full-sized field in Saskatchewan, the Eddies’ have spent training camp on the miniature indoor pitch at the Commonwealth Fieldhouse. With a full squad, the space is cramped.

So, coach Colin Miller can’t get wait to get on the plane to Amsterdam and then connect to Scotland. The team leaves Thursday and will play a series of preseason matches against Scottish sides and Newcastle United’s youth sides before heading back to North America and the April 2 NASL season opener at Rayo OKC.

“The guys are in a good place, but we need to get out of here,” Miller said after Tuesday’s training session. “It’s getting claustrophobic. Guys are on top of each other, there’s a bit of chirping going on at training, as you would imagine. We’re now into our fourth or fifth week of preseason at this little place and it’s understandable that we need to get out and get some fresh air.

“Our games will come thick and fast in Scotland, then we’ll come back and have an inter-squad game the Saturday before Oklahoma. Then we’ll be good to go. We’ll travel down on the Wednesday and get to Oklahoma, train Thursday and Friday and then we’re good. The next two and three weeks are going to fly by.”

The reason the Eddies are limited to the tiny spot is because Edmonton has no full-size fields that are protected from the winter elements. All of the indoor soccer facilities in Edmonton are of the turf-and-board variety.

The space is even more cramped because Brazilian midfielder Gustavo Salgueiro is finally in Edmonton. Even though he was signed in the offseason, his arrival has been delayed because of paperwork. But, that’s now in place and Gustavo — who doesn’t speak English — was on the pitch letting his abilities do the talking for him.

“He’s got real good qualities,” said Miller. “He’s what I thought he would be when we watched him. I’m really pleased, he’s got a lot of ability. He’s already picked out a couple of passes this morning where the guys are going ‘where did that come from?’ So, touching wood, there’s never any 100-per-cent guarantees at any level of the game, but I think he’ll be a strong addition to the squad. I think the fans will love him and, if he is what we think he could be, he could be a real difference-maker for us.”

Defender Adam Eckersley should be able to join full training once the team gets to Scotland — because the Eddies will be on grass surfaces there as opposed to Commonwealth’s artificial pitch. Eckersley said he’s close to full recovery after he hurt his groin playing for Hibernian in December. He was running on the sidelines on Tuesday as the team trained.