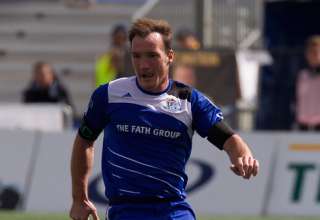 Before the 2016 season, FC Edmonton captain Albert Watson offered a blunt assessment of the previous three years he spent with the club.

“In the three years, we really haven’t done anything,” he said. “You can’t say that you’ve done anything until you get into the fight for the cup.”

Fast forward several months. With a little less than a month to go in the NASL regular season, Watson and his FCE teammates will clinch a playoff spot if they beat the visiting Tampa Bay Rowdies Sunday afternoon. If they clinch, it will mark the first time since 2011 that the Eddies have qualified for the post-season.

It would make for a fine Thanksgiving weekend.

“It’s a big motivation, for a start, on Sunday,” said Watson, who trained with his teammates in -1C temperatures at Clarke Field Thursday. “We’ve put in hard work this year, and we’ve got the rewards. If you look at things, from the start of the season, we’ve been consistent. We’ve won away from home, we’ve had good results away from home, the boys have put shifts in week in, week out, so we deserve it.

“But it’s still all to play for. We want to finish second in the league, or even first in the league if the Cosmos does us a favour. I know they’re a good few points ahead of us, but they have to still play teams that are up and around them.”

The Eddies have five games left in the regular season. The Cosmos have four. Indy (the spring-season champ) and New York (the fall-season leader) have clinched two of the four playoff spots. The Eddies are 10 points up on Minnesota and Tampa Bay, and 11 points up on Miami FC, in the full-season table. So, if the Eddies clinch this weekend, three spots will be decided (apart from the seedings). That would leave a pitched battle for the fourth spot. Tampa Bay is in the thick of that race.

So, even though the Eddies went to Al Lang Stadium and beat the Rowdies 1-0 earlier this fall season, they will take nothing for granted.

“To be fair, we won 1-0 there and it was daylight robbery, to be honest,” said Watson. “They had chances to win the game. In the first half, we weren’t good… It was a fortunate result for us, but we kept a clean sheet and won 1-0. We’ve done a lot of that this season. So we are confident going into Sunday, but that’s down to the work we’ve done all year, the work we do in training, and the players we have.

In that 1-0 win, Eddies keeper Matt VanOekel made a series of outstanding saves to keep his team in the game, which turned on a second-half penalty kick that FCE converted.

The win-and-you’re-in scenario means a lot to FCE coach Colin Miller, who has been leading the club since the 2013 season.

“Other than year one [since taking over as coach], we’ve been in the mix the last couple of years, which has been a credit to everyone at the club. But, now, the chance of winning on Sunday and qualifying for the playoffs, well this time last year if you look at it, we were depending on other people and hoping certain things would happen. Now, it’s very much in our hands. If someone had said that to us at the start of the season, with five games to go, win at home against Tampa Bay in freezing cold weather, would you take that opportunity? I would have bit your hand off.”

Yes, the cold weather. It was below the freezing mark Thursday in Edmonton. Snow is in the forecast for Saturday. But Sunday is forecast to have a high of 5 C, which is a perfectly fine autumn afternoon for those in Edmonton. But, to the Tampa Bay players, it won’t feel pleasant. This is the payback time in the schedule, where the Eddies — who have to travel to the south and play in steaming temperatures — get to turn the tables and freeze their opponents out.

“It’s going to feel freezing,” said Watson. “It was freezing even for us this morning, I wonder what it will feel like for them.”