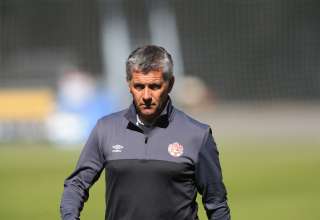 Michael Findlay, the interim coach of the national side, knows that he can’t put a stop to the neutral-site games, but wants to limit them as much as possible. He feels the best way to prepare the Canadian side for the 2017 Gold Cup — and 2022 World Cup qualifying down the road — is to have the team playing in venues where a.) there is a crowd and b.) that crowd is either hostile to the Canadian side or is pro-Canadian.

“Going forward, we want to eliminate as many games in the neutral atmosphere as possible,” he said.

Canada will play Mauritania on Thursday in Marrakech, Morocco. Then, on the 11th, the team will face the host country. Mauritania neighbours Morocco. And, the Moroccans will play Gabon in a World Cup qualifier Oct. 8 before heading back home to face Canada.

Findlay said it’s important to play countries that have things at stake.

“It was important for us that these games not be neutral games,” he said. “Morocco will be returning after an important match in Gabon… and we have had a Mauritanian experience in the the past. We know that they are a competitive side with a lot of athleticism and speed and some very technical players.”

Findlay said Canada is close to signing a deal for a friendly in the Nov. 7-15 window on the FIFA calendar. He said if the deal is closed, “it will be another non-neutral site game.”

The coach called in a roster filled with younger players, and the goal is to play as many as possible over the course of the two games. He has no major injuries to deal with.

“We want to reintroduce the competitive spirit to those who participated in the final games of World Cup qualifying and to introduce the new players,” he said.

But, a wrench was thrown into the plans. The game against Mauritania was set for Oct. 7, but was moved up a day. Why? Because there’s a general election in Morocco on the 7th.

“The Moroccan government wasn’t comfortable with us having access to the stadium on the day of the election,” said Findlay.

He admitted that, while the team is healthy, moving the game up a day “will affect some decisions in regard to the starting lineup.”