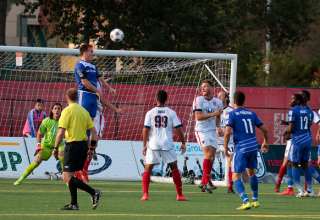 FC Edmonton snapped a two-game losing streak with a 2-0 Wednesday over the Indy Eleven.

But, Indy Eleven coach Tim Regan felt that, with his club trailing 1-0 in the second half, that the momentum had shifted in favour of the visitors. He felt that the equalizer was coming.

In the 64th minute, forward Charlie Rugg took on Eddies defender Albert Watson in the penalty area. The ball came up and hit Watson on the arm. Referee Dave Barrie shook his head as Rugg lobbied for a penalty call.

Just minutes later, with the Eddies on the break, Lance Laing took on Indy fullback Judson McKinney in the penalty area. The ball came up and hit McKinney on the arm. This time, Barrie pointed to the area. Tomi Ameobi, who missed on a couple of chances earlier in the match, converted from the spot to give the Eddies an insurmountable lead.

“There were two hand balls. One got called. One didn’t. That’s soccer,” Regan said.

Watson — who scored the opening goal off a corner — said Barrie was right not to call a penalty against him. “The arm was at my side, the ball hit me from two yards away.”

In his mind, it was ball to arm, not arm to ball. Barrie obviously agreed — but didn’t feel that way about the McKinney incident.

But it needs to be noted that the Eddies carved out more scoring chances on the day. And, even if those calls had evened out, the Eddies were still another goal to the good.

Regan allowed that his Eleven side was “overrun” in the first half. A dreadful giveaway from Indy’s Don Smart led to an FCE break — and, eventually a corner kick. Laing took the corner, and Watson leaped to make solid contact with the ball. It flew into the top corner.

Not only did the Eleven make a hash of the set piece, the fact that the Eddies even had a corner was because of soft play from Smart.

The Eddies should have been up a couple going into the half. A deft pass from Dustin Corea split Indy’s central defenders and sent Ameobi in alone. With keeper Keith Cardona at his mercy, Ameobi fired the ball wide.

Early in the second half, Ameobi headed a cross from Laing just over the bar.

Eddies Coach Colin Miller said his team deserved the three points on the day — and was proud of how the club rebounded after surrendering an injury-time game-winning strike Sunday against league-leading Ottawa.

Watson said that the Eddies did the simple things well.

“We got back to doing the basics that eluded us in the last game,” he said.