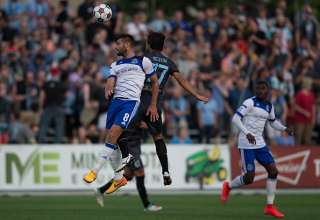 For FC Edmonton, a game at Minnesota United represents the shortest road trip it goes on all NASL season long. It’s a direct flight from Edmonton to the Twin Cities.

So, the last thing you’d expect is a travel nightmare. But that’s what happened to the Eddies ahead of Saturday’s 1-1 draw in Minnesota. The team showed up at Edmonton International Airport Friday at 6:30 a.m. The players and coaches all cleared customs. Then, they were told that, because of mechanical issues with the plane, their flight wouldn’t leave on time. Because they’d all gone through customs, they didn’t want to take the chance, leave the departures area, and then have to go through all the lineups and searches again.

So they waited. And waited. Waited some more. And when they were done waiting, they were told to wait a little longer.

Their flight didn’t leave for about another 12 hours.

No word if Tom Hanks will play FCE coach Colin Miller in the Edmonton version of The Terminal.

So, given the fact that his team’s pre-game schedule was totally messed up, Miller took the positives from Saturday’s 1-1 draw.

“Credit to the guys. Not one of them moaned or complained [in the airport]. It shows the character of the guys that we have. We didn’t get to Minnesota till around 9 p.m. last night.”

Referee Daniel Radford was made (in)famous when his notebook was torn up by Sounder Clint Dempsey, in a U.S. Open Cup match in three Seattle players were sent off in a loss to the Portland Timbers. He was assigned last night’s match.

Right after the halftime kickoff, he awarded Minnesota United; but, a worthy-of-debate moment came in the 61st minute, when he decided against sending off Minnesota defender Aaron Pitchkolan for what looked to be goal-scoring-chance-denying foul on Tomi Ameobi.

Ameobi had the ball, and pushed it past Pitchkolan and looked to be clear in on goal. Pitchkolan tripped Ameobi, preventing the breakaway.

But Miller said Minnesota could also point to Radford’s decision to not send off Eddie midfielder Cristian Raudales, who got away with a couple of questionable fouls after he’d already seen a yellow card. Miller allowed “that Cristian could very well have been sent off. So it went both ways.”

Both United and the Eddies — the two highest scoring teams in NASL coming into this weekend’s action — were coming off midweek matches. The first half saw little in terms of great scoring chances being created. The best opportunity of the half belonged to the home team; Yago Silva placed a nice ball into the FCE penalty area for teammate Juliano Vicentini. But Vicentini blasted over the bar. The Eddies were able to get the ball on the counter several times; but, as Miller noted, the final balls weren’t great.

But, the scoreless draw was broken just seconds after the start of the second half. Yago got the ball in the box, where he was met by Johann Smith, who put his shoulder into the attacker. Yago went down, and Radford pointed to the spot. Was it a fair shoulder challenge? Not in Radford’s book. Christian Ramirez, NASL’s 2014 leading scorer, converted from the penalty spot.

After Minnesota took the lead, the Eddies began to look dangerous on the counter, and Laince Laing looked to be more dangerous down the left side. The game opened up.

“What we saw were two teams going for it,” said Miller. “Minnesota are a great side. And we went at it. To me, what a great advert it was for the NASL.”

But, not soon after, the Eddies had their equalizer. Laing rambled down the left and squared the ball for Ameobi, who bundled the ball across the line.

Laing then led another counterattack; he came down the left with the ball, and Sainey Nyassi was flying in off the right wing. Laing’s far-post cross was too heavy, and Nyassi couldn’t get there.

“Laing was right to cross the ball, he brought the goalie out, but it was just too heavy,” said Miller.

Then, off a goalmouth scramble, Minnesota had the last chance to win it, with Ramirez actually getting in the way of a shot from Vincentini.

“Yes, they had some chances, and we dodged some bullets,” said Miller. “They had spells of possession where they were dangerous. But, we also created some great chances, and I can say that maybe it’s two points dropped for us. But, this is a very tough place to play and the guys went through a lot.”

The Eddies are now seven points behind fall-season leaders Ottawa Fury, who spanked Indy Eleven 4-1 on Saturday. In the combined standings, the Eddies are two points behind Minnesota for the fourth and final post-season spot. The Loons have a game in hand, but there is a lot of soccer left to play.