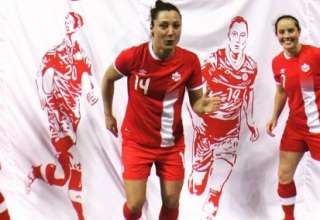 There may be no harder game in Canadian soccer to analyze that Saturday’s match at BC Place which saw our women’s national side beat Mexico 3-2 on the strength of a Janine Beckie brace.

This was Canada’s first international since winning the bronze medal at the 2016 Olympics; it marked the final games in the carriers of defender Marie-Eve Nault (who played the full 90), fullback Rhian Wilkinson and forward Melissa Tancredi. This game was about saluting those players and backslapping the program in what has been sold as a “celebratory” match since day one.

(What’s interesting is the amount of column inches dedicated to the retirement of men’s national team stalwart Julian de Guzman compared to the media attention paid to this women’s match. I will leave it at that.)

To further make this game harder to break down, two of Canada’s defensive mainstays, fullback Ashley Lawrence and centre back Kadehisha Buchanan, weren’t on hand, as they are settling into their new pro careers in France. Midfielder Sophie Schmidt didn’t start.

Sarah Stratigakis got her first senior cap for Canada.

But, the win did well to soothe the minds of those Canadian women’s soccer followers whose most recent memories of one of our national teams in international play wasn’t the Olympics, but Canada’s horrorshow flameout at the U-2o World Cup.

And, with coach John Herdman missing some key cogs, with the team showing signs of rust — you have to shrug and say, “well, a win’s a win” and move on.

In the space of two minutes we saw brilliance and a cringeworthy moment from Deanne Rose. First, the brilliance; in the 14th minute, the young Canadian forward scored the opener, taking a pass from Christine Sinclair and then blowing past the Mexican backline before a nifty finish into the bottom corner. Rose showed us that she can easily accelerate past defenders with the ball at her feet, and that she can still come up with a composed finish.

But then came the oh-no moment. Just seconds after she opened the scoring, Rose’s careless pass attempt into the middle of the field went right to Mexico’s Nancy Antonio, who didn’t waste the gift that the Canadian teen had presented her. Antonio’s shot beat Canadian keeper Stephanie Labbe — and, had this game counted for more than simply a celebratory home match, we’d be talking about how Rose gave one up just as easily as she’d scored one.

But Beckie restored Canada’s lead, placing a low shot just inside the post after she had retrieved a poor Mexican clearing attempt a the top of the penalty area.

Beckie’s second goal of the game came on a penalty, and it provided an interesting talking point. Sinclair was fouled inside the box, and you’d have though that the No. 2-all-time scorer in international women’s soccer history would go to the spot and try to add to her total.  But it was Beckie who stepped up, a sign that the team is looking forward, understanding that Beckie will be the striker in the future who will be called upon to convert these kind of chances in high-stress situations.

Katie Johnson pulled one back for Mexico in the second half, but let’s face it — the second 45 minutes was more about ovations for retiring players and salutes for the national side than it was about extending the lead. Wilkinson and Tancredi came on as subs, to rousing ovations, getting their final chances to soak up some well-deserved adulation for their fantastic careers.