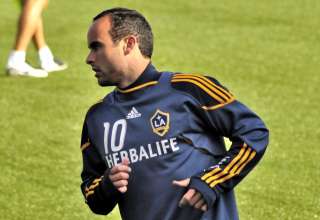 Landon Donovan was named the MLS Player of the Week after winning the media vote by a landslide.

Donovan secured 15 of the 22 first-place votes from the membership of the North American Soccer Reporters.

After the Galaxy looked doomed to defeat in Salt Lake City, Donovan took control of the match and brought his team back from the dead. After RSL took a 2-0 lead, Donovan scored to make it 2-1, then fed the pass to Mike Magee for the equalizer, then scored the winning goal.

Against the Whitecaps, Donovan scored, albeit on a penalty, and set up another goal. He was a key part of a first-half offensive surge from the Galaxy that produced three goals and sent the normally defensively stingy Whitecaps for a loop.

How The 11 voted: Donovan. Looks like things are starting to get back to normal in Galaxyland. After a dreadful start to the season, the Galaxy has won three in a row and has climbed into a playoff spot in the West. Looks like rumours of the Galaxy’s demise have been greatly exaggerated.