June 20, 2021
9 New Articles
Home MLS Toronto FC Do the right thing, TFC; start the replay with an own goal 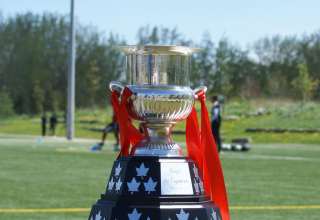 Soccer is supposed to be the beautiful game. Surely, with all the diving, feigning of injuries and players begging the refs for their opponents to be carded, that image has been sullied over the years.

But, it’s supposed to be the game where sportsmanship reigns supreme. Where a team kicks the ball into touch if a player is hurt, no matter the uniform. And, it is assured it will get the ball back once it has done so.

Thursday morning’s replay (Ed. note: Now postponed to July 2) of the Nutrilite Canadian Championship semifinal gives Aron Winter the chance to show that he isn’t just a good coach, but understands the greater good. Tomorrow, we have a chance to see not just a game to settle the Canadian title, but a chance for Winter to show that he is a man of character.

Winter will understand that, because of freakish weather, the Vancouver Whitecaps’ deserved 1-0 lead — their elimination of TFC’s road goal from the first leg — is wiped clean.

Yes, the Canadian Soccer Association’s rules are quite clear. A match that is abandoned must be replayed in full.

But Winter can still do the right thing. He can order his troops to take the opening kickoff and then fire the ball into their own goal.

Remember that TFC has a massive advantage Thursday. It has an entire roster of players that it can call upon to replace the troops who played an hour on Wednesday. Vancouver coach Teitur Thordardson will have to piece together a squad from the players he brought to Toronto. And, playing on a wet field is like playing in wet cement; it’s so heavy on the legs.

TFC still has that advantage. And, instead of having 30 minutes — which is roughly where the game was called on Wednesday — to make up the 1-0 deficit, the Reds would have 90.

But, understanding that the circumstances were cruel on the opponent who was deservedly ahead, giving the goal up would be the right thing to do. It would set a standard that TFC is a club worthy of support; that after years of front-office shenanigans, broken promises and disappointment, that the club has a glimmer of goodness. If TFC comes back — its victory isn’t sullied.

Sure, the win-at-all-costs types will suggest that this column is hippie drivel, the kind of “we love soccer because every game ends in a tie” stuff we see from soccer moms and public-television cartoon portrayals of the game.

But the precedent is there.

In 1999, Arsenal beat Sheffield United 2-1 in an FA Cup match. The winning goal came because Arsenal’s Kanu — instead of kicking the ball back to the Blades after they had put the ball into touch to allow an injured player to be treated — took it off a throw in and squared it to Marc Overmars to score.

Gunners’ manager Arsene Wenger offered to replay the match. And, make no mistake: With Premiership schedules being so crowded, offering to replay a game that you’d already won is a greater sacrifice than going down 1-0.

As for the abandonment? The CSA’s rules for the NCC are clear. There is no room for negotiation. From the rulebook:

“If the match is abandoned before the completion of normal playing time because of extreme
weather or for reasons outside the control of the host team, the match shall be replayed in its
entirety the following day, thus avoiding the considerable extra expense for the visiting team. If it
is still impossible to play the match the next day for the same reasons, the match may be
postponed by another day, provided both teams agree. If the match can still not be played on the
third day, the expenses thus incurred by the visiting team shall be split between the two teams. A
decision will be taken within two hours of the referee’s decision to abandon the match, in
consultation with the two clubs concerned. In case of dispute, the CSA Organising Committee
fixes the date and kick-off time of the match. Its decision is final.”

“An abandoned match is replayed unless the competition rules provide otherwise.”

But, FIFA leaves it open-ended for various associations to determine their own criteria for abandoning matches.

That wasn’t the case. Rules are rules. But, sportsmanship should transcend the rules. If TFC wins tomorrow, it will be remembered as the Cup it didn’t deserve. There is no escaping that. But, at least by putting the aggregate score back to 2-1, they would mitigate the bad feelings and embarrassment that will long be associated with the 2011 edition of the NCC.