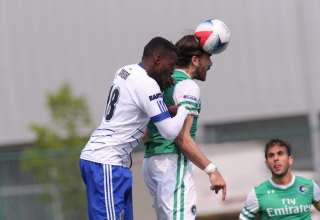 But Diakite is showing some Bunbury-like skills in front of goal; his second-half header off an Adam Eckersley free kick gave FC Edmonton a 2-1 win Sunday over the New York Cosmos at Clarke Field.

The Eddies are just two points out of top spot in the NASL’s spring-season table. And Diakite has now scored two match-winners so far in 2016.

“I won’t say nothing to Alex now, because the way the big fella’s scoring, he’s going to be a marked man, for sure,” Eddies coach Colin Miller said after the match. “I’m very happy because we now look a threat from set pieces and corner kicks. And we’ve had big players in the past, with Albert (Watson) and Mallan (Roberts) and guys like that. But I don’t think we’ve had enough goals scored. We haven’t looked like we have this season on set plays.”

The game was a fast-paced toe-to-toe battle between the Cosmos and the Eddies, but kickoff was delayed because of a… wait for it… sock controversy. Referee Yusri Rudolf was not happy when both the Cosmos and Eddies lined up in white socks.

He picked the ball up from the centre dot and went to both benches, wondering why the teams would have the same coloured socks. By rule, teams must not have the same colour shirts, shorts OR socks. But Both Miller and Cosmos coach Giovanni Savarese indicated that they could live with each team wearing white socks. A call was made to NASL headquarters, where it was determined that the game could start with both teams in white socks, while the Eddies would switch to blue at halftime.

When the game began, Cosmos midfield Yohandry Orozco established himself as a force; first, he nutmegged Eddies right back Allan Zebie and then lashed a shot on goal that FCE keeper Matt VanOekel did well to stop; then, he delivered a great cross to Jairo Arrieta. But, Arrieta couldn’t get enough on the ball to put into an open goal.

The Eddies then caught the Cosmos pushing forward. Dustin Corea delivered a wonderful long ball over the top for Jason Plumhoff, playing in the place of the injured Sainey Nyassi. Plumhoff got to the box, was able to turn inside of Cosmos defender Carlos Mendes, and delivered a shot inside the post.

“I thought it was a great goal,” said Plumhoff of the first NASL tally of his career. “I always like to dart past the defenders and Dustin Corea saw me run. I think I took a very good first touch, cut it back, then hit it back post.”

It was a massive confidence builder for an Eddies side that was embarrassed 3-0 at home by Ottawa in the first leg of their Amway Canadian Championship series.

But Orozco — New York’s best player on the day — got things on level terms. Just minutes after Hunter Freeman directed a corner-kick off the post, Orozco got onto the end of a pass from Arrieta and directed the ball into the corner of the goal.

Just before halftime, Michael Lahoud had a great chance to give the Cosmos the lead; he got the ball alone in front of the Eddies’ goal, but sent his effort wide.

The Eddies came out with a couple of decent attempts from Daryl Fordyce to start the second half, both shots from the top of the area. And VanOekel was called on to make a great save on Arango, who got in the box one-on-one with Diakite. The FCE defender did well to shuffle Arango away from goal, and VanOekel came off his line to take away the angle.

That set the stage for Diakite to claim the winner. And the big defender, who was on last week’s NASL team of the week, is likely headed right back there.