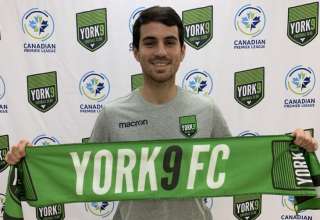 One of the goals of the Canadian Premier League was to give opportunities to Canadians playing in Europe — and then fallen off the radars of fans back home — the chance to repatriate themselves.

York 9’s two latest signings are perfect examples of the sort of bring-them-back efforts we’ll see from CanPL teams as they prep for the nascent league’s inaugural season.

York 9 announced Monday evening that it had signed Jamaica-born, Brampton, Ont.-raised defender Roger Thompson and midfielder Joseph Di Chiara, who left Canada for the Russia’s top division when he was only a teenager, and then had a sniff with the Canadian national side.

Both had what would best be termed slivers of opportunities with the Canadian youth program. Di Chiara made some waves on the Canadian soccer scene seven years ago, as the very notion of a teen from the Greater Toronto Area attracting the interest of Kryliya Sovetov in the Russian top flight, was, well, a story too good to ignore.

“It’s very difficult getting used to the Russian style, it’s a very strong, very physical game,” Di Chiara said to me back in 2011. For more of that interview, click HERE.

Since then, he’s played in Hungary, Kazakhstan and Lithuania; and he has had several stints in League1 Ontario over the previous four years. So, he’s familiar with York 9’s staff, not only coach Jim Brennan, but assistant Carmine Isacco, who had worked with Vaughan Azzurri, the club at which Di Chiara spent most of his time in L1O with.

Thompson has played in Finland, Sweden and Germany; his most notable stop came in 2015-16, when he played for Trelleborg of the Swedish league and helped the team gain promotion from the third tier to the second tier of that country’s professional ladder. He’s  expected to be a big presence in the middle of the back line, a tall, powerful player who will win a lot of aerial battles but can also move the ball with his feet.