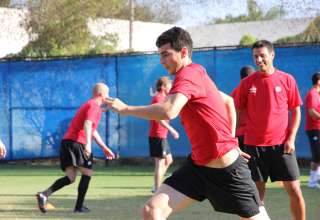 After all, the 19-year-old midfielder is still eligible for the U-23 pool. But he wasn’t part of the squad that failed to make the U-20 World Cup this past year, even though he was eligible. But Di Chiara understood that leaving home to try and make a career for himself in the Russian Premier League had taken him away from the eyes of Canadian soccer fans and scouts. So he’d need to have some success in Russia, then hope for a call down the road.

And the call did come — from national men’s coach Stephen Hart. And Di Chiara, coming off sports hernia surgery, is with the Canadian team as it prepares for Friday’s World Cup qualifier in St. Lucia and then an Oct. 11 home date with Puerto Rico.

“I was surprised to get the call,” said Di Chiara from Canada’s camp on Tuesday, his second full day of training with the national side. “I thought maybe I’d get the call to play for a youth team.”

Di Chiara describes himself as a “tenacious,” physical midfielder. He left Thornhill, Ont.’s Spartacus Soccer Club for Russia, recommended to Kryliya Sovetov (Soviet Wings) by one of his coaches. Spartacus has a strong Russian influence through its coaches, all the way up to president Yuri Studin. (For more on Spartacus, see HERE).

“For me, Russia was a good place to start,” said Di Chiara. “I wasn’t thinking much about the (Canadian) national team at the time. I was thinking about starting my own professional career.”

But he knew that if he did well enough with a Russian Premier League team, that would be his best advertisement to the Canadian Soccer Association.

This year, he’s made three appearances for the Wings, before his season was derailed by a sports hernia that required surgery. But, even worse, the coach who gave him his contract, Aleksandr Tarkhanov, was fired halfway through the season, with the club mired in the relegation zone. Under new boss Andrey Kobelev, the Samara side has edged just out of the trouble spots. But Di Chiara knows the club is in a battle to stay up.

“It’s tough. Every game is very difficult. We try to fight for points. But, I really believe this team is good enough. We have a good coach, we have a good club. We’ll survive.”

As for playing in Russia — it suits Di Chiara’s physical style. It is not a league for the timid.

Timing is everything in life — and that’s especially true in sports. Di Chiara picked the best possible time to come to Russia. Oil money has made Russian owners some of the richest in Europe; and they are splashing the cash on players. Samuel Eto’o has made the move. Balazs Dzsudzsak, the former teammate of Canadian midfielder Atiba Hutchinson at PSV Eindhoven, left the Netherlands for Russia. And Russia is getting the World Cup in 2018, which means a large number of teams, including the Wings, are getting new stadiums in which to play.

“Yes, this is something that the players are talking about, the amount of money in Russia,” said Di Chiara. “We are getting a new stadium built for us in Samara (the city the Wings call home) for the World Cup. There is a new stadium in Grozny. It’s already a strong league, now it’s becoming much stronger down the road. It would be nice to have a long career in Russia.”

But, with Hutchinson out with what looks to be long-term knee problem, and Canada playing a St. Lucia side that, well, is probably the least talented of this World Cup qualifying group, Di Chiara knows there’s a chance for him to get his first Canada cap this weekend. And he hopes that this is just the start of a nice, long international career.

“I’m hoping this is not the last time I get the call.”