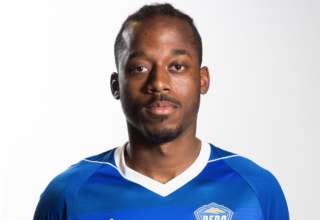 When Jordan Murrell takes the field for his first Valour FC training session, me might feel right at home. That’s because he’ll be lining up next to Skylar Thomas.

Murrell, whose signing was announced by Valour FC on Tuesday, will likely combine with Thomas to anchor the team’s defence. The two have a long friendship. They met at a U-18 national-team camp in Costa Rica, and then spent four years together at Syracuse University.

“To be reunited with one of my close friends is great,” said Murrell, who spent the last four seasons, in the USL, in Real Salt Lake’s system, then with the Pittsburgh Riverhounds and finally Reno 1868.

Also unveiled Tuesday was Glenn Muenkat, a Canadian midfielder who had played in the youth system at Kaiserslautern.

Muenkat recalled working with Gale at an U-23 camp. “He taught me so many things in that short span,” he said.

Murrell admitted he’s never been to Winnipeg, but is looking forward to be able to play in front of Canadian fans, and more chances to perform in front of friends and family. He said that he’s a fan of Gale’s footballing philosophy, and that was the big selling point for him to make the decision to sign with Valour FC.

And, while Murrell is thankful for the chance to come back home, he had nothing but kind words to say about the American teams for which he’s played.

“I enjoyed every minute I played in the USL,” he said. “I am thankful for the opportunities that those teams gave me.”