November 29, 2022
9 New Articles
Home Global Game Asia Despite some glimmers of hope, Canada shut out yet again in international play 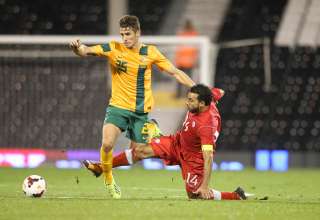 There were some glimmers of hope that Canada’s men’s team could, goshdarnit, score a goal Tuesday against Australia.

But it didn’t come to pass. Canada now has gone eight international matches without scoring a goal. The last marker came back on March 22, against Japan. Since then, there was a 2-0 loss to Belarus, a 1-0 setback to Costa Rica in Edmonton, three Gold Cup shutouts, two goose-eggs against Mauritania and, now, this — a loss to the Socceroos.

Meanwhile, Australia scored three times, including an opener 27 seconds after the opening kickoff. It’s a good thing that Canadian national-team coach Benito Floro said before Tuesday’s friendly in London, England that the result didn’t really matter (CLICK HERE). That’s because a 3-0 scoreline from Craven Cottage suggested that Canada was as poor in the back, as well.

Josh Kennedy gave the partisan support at Craven Cottage (boy, do the Australian expats come out and support their boys, credit to them) something to roar about before the 30-second mark. Kennedy outleapt Canadian defender Nik Ledgerwood and headed home a cross from Mark Bresciano. The cross came after Canadian midfielder Julian De Guzman’s attempt at a sliding challenge just ended up leaving the ball for Bresciano to whip in to a dangerous area.

De Guzman left the match early in the first half with an injury.

But, thanks to some inspired work from David Edgar, moved into a midfield void created by the injury to Atiba Hutchinson, Canada had better looks at the opposition goal than long-suffering supporters had seen in a while.

Aussie goalie Mitch Langerak moved across the line to make an excellent sixth-minute save on a Simeon Jackson effort. Off a free kick, Edgar got to the ball in the box, nodding it on for Jackson, left unmarked near the back post. But Langerak made himself big and did well to deny the effort.

Edgar made a great run down the right side, with no one in sight from the Aussies’ side. He delivered a low cross to the front of goal that Dwayne De Rosario couldn’t control. Had DeRo scored, it would have been cruel to the Australians, as replays indicated he was about two strides offside when the ball was played.

Edgar had one more moment of first-half magic, a perfect cross for Tosaint Ricketts. But the Canadian striker’s bullet header was parried away by Langerak.

Three great chances, nothing to show for them.

In the second half, Canada’s influence on the game waned, and the question really was how many the Aussies would score. Canada’s loose defending was punished.

“In the second half the young players did not play well because the opponent was physically very powerful,” Floro said after the match. “They made a big press and we didn’t have any chances at goal. It’s necessary with the young players because we need to give them international experience. This is the problem for us.

“The only way to improve our level is to play a lot of matches and by training, not only with these players but also the younger ones to teach how we want them to play.”

Six minutes after the second half began, the Australians got their second. Off a corner, the ball came just outside the box, where fullback Rhys Williams hit a bouncing volley of an effort. Dario Vidosic got his head to the bouncing ball, deflecting it enough to get it past Canadian keeper Milan Borjan.

Matt McKay should have had Australia up by three in the 70th minute, but Borjan got to his volleyed effort.

But the Aussies weren’t going to be denied their third. In the 78th, another jump ball in the box — and, just like the first minute of play, the Aussies won the battle. This time, it was Matthew Leckie beating Adam Straith to the ball and nodding home the third of the match.

“We just wanted a positive result and a positive performance and that is what we got,” Socceroos interim coach Aurelio Vidmar, who replaced former Canadian-team boss Holger Osieck, was quoted on Football Federation Australia’s official website. “It was a performance that everyone was waiting for and one that is expected every time we go out onto the park. We asked for passion and that is what we got.”

“We have two problems: The first is a question of physical preparation, but that depends on the clubs where they’re playing, and the other is technically. So the only way we can help is tactically. We need a lot camps, we need the same technical direction from the young players because we need to advance from this camp to the others and to have international experience.