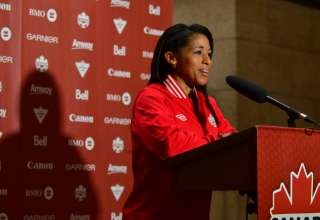 (Look for the full Q and A with the Destroyer, Desiree Scott, in the winter issue of Plastic Pitch. Issue 4 should be out in December. For info on how to get Plastic Pitch, go to the end of this post).

She’s committed to Canada’s eight-month training camp ahead of the Women’s World Cup, and she’s devoting her time to the national-team cause. That includes Saturday’s friendly against Japan at Edmonton’s Commonwealth Stadium and the Oct. 28 rematch against the World Cup champs at Vancouver’s BC Place.

But, once the tournament ends, Scott says she will give a Notts County return some serious consideration. In 2014, Scott, who was one of the Canadian players in NWSL who had her salary paid by the Canadoan Soccer Association, decided to leave the U.S.-based league for England. She started 20 games for Notts County in England’s WSL — and certainly caused some waves by making the decision to leave NWSL for an English league that mixes part- and full-time players.

Still, if Notts County wants her back after the Women’s World Cup, chances are that she’ll listen.

“I really enjoyed it,” she said Friday. “Right now, my focus is on the World Cup. I will be full-time with the national-team leading up to that. But, after the World Cup, the options are open. But I did really enjoy it in England and, yes, I would go back. Right now, the plan is to be with the national team, full-time. We are devoted to World Cup prep; and hopefully to raise that trophy on July 5th. I will decide what to do (professionally) after that.”

And how does the English WSL compare to NWSL?

“I think the difference over in England is the amount of… we have part-time and full-time players,” said Scott. “For example, when I was in Kansas City we were training every day with a full squad versus in England, the part-time players were only there twice a week. When you are playing with some of the best players in the world, day in and day out, that really helps add to the calibre of play in the league. But, for me, it definitely wasn’t a walk in the park. It was physical. I’m usually the one destroying people and I was the one getting big-time tackles in. I think it’s one of the most competitive leagues they have ever had over there. I think it’s on the rise, but there’s still improvements to be made for sure.”

The Canadians are playing a schedule of friendlies which sees them facing the heavyweights — the Americans, Germans and Japanese — at WWC venues. But, Canada hasn’t beaten any of the so-called “tier one” teams during this cycle. Scott said that the Japanese series represent more than two friendlies. Canada needs to get a W.

“Yeah, if you don’t beat these tier-one teams going into the tournament, you go into it with the ‘what if?’ factor. And we don’t want that. We want to go in there confident, that we can beat these teams, that we can compete with the best teams in the world. We need to do that in the build-up over the next eight months. So, Japan is a big test for us, and we’re not going out there to tie. We are going out there to win the game. Anytime you come to play Canada you are going to get a tough game. And I think our coach (John Herdman) has gone out of his way to plan and be strategic about the teams we are playing leading up to the World Cup. These are the teams we may need to face in order to get to the final.”