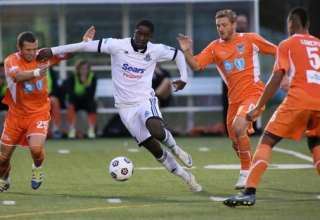 It was the kind of game that coaches hate, but fans love to watch.

Neither the Carolina or FC Edmonton put on defensive clinics in a 2-2 draw which saw Eddie Kyle Porter trade braces with the RailHawks’ Nick Zimmerman.

It was a game between FCE, which had learned the night before that its NASL playoff hopes were dashed, and a Carolina team looking to rise as high as third in the table with a win at Clarke Stadium. Both teams scored inside the first 10 minutes in a game that saw very little in terms of tackling or physical play.

But, that was good for the fans, who saw plenty of scoring chances. It made the game easy on the eye (again, unless you were one of the coaches).

“We’re fighting for pride right now,” said Porter. “We have a great owner and great fans. So we just want to end the season right, on a positive note.”

Because the Eddies’ didn’t learn until late Tuesday that Minnesota had beaten Puerto Rico — killing FCE’s hopes of getting to the playoffs with three dates left on the NASL schedule — coach Harry Sinkgraven started the same lineup he would have went with had the postseason chase still been on. He simply didn’t have the time to adjust and go with an experimental lineup.

The big changes saw Jonathan Joseph-Augustin go into a central defensive position for the injured David Proctor, and Porter move to the centre of the attack, a spot usually held by Yashir Pinto.

The Porter move would soon pay off — and it might leave fans wondering what might have been had he been playing in the centre forward slot all season long, ahead of Pinto, who has three NASL goals this season.

But before Porter could get his night off the ground, the RailHawks put the hosts under a lot of pressure. Within four minutes, they got their goal. After a poor kick from FCE keeper Lance Parker, RailHawks’ winger Ty Shipalane danced down the right side and blew past left back Kevin Hatchi. He then danced around Augustin, who decided to back in rather than challenge Shipalane for the ball. Shipalane then squared a simple ball for Zimmerman to knock home. Sure, Parker’s miskick started the proceedings, but the Eddies backed in as Shipalane came forward, compounding the error.

The attack began a pattern for the RailHawks. Understanding that Hatchi could not deal with Shipalane, the visitors kept attacking down the right wing, leading to a series of dangerous attacks. But, thanks to some wayward shooting, Shipalane’s work only created the one first-half goal. In fact, Shipalane was giving Hatchi such a tough time, and Carolina’s attack was so right-wing oriented, that fullback Antonio Rago, who plays the other side, came over to help Hatchi contend with the RailHawks’ speedster. It’s not often when two fullbacks play the same side, but it did happen for a period in the first half.

“He’s giving them all sorts of problems, with his pace, his movement,” RailHawks coach Colin Clarke said at halftime.

But while Clarke was enthused about the work of his winger, he was angered by his defenders.

The Eddies tied the match before it was 10 minutes old; midfielder Adam West sent a ball down the left wing for Michael Cox. No one challenged Cox, who launched a cross for Porter, who was unmarked in the centre of the box, to head home.

And the Eddies took the lead early in the second half after another comedy of RailHawks’ errors. Coming out of his own end, RailHawks defender Gale Agboussoumonde — who struggled all night long — put the ball right onto the feet of Eddie Shaun Saiko. He then played the ball forward to Porter who, despite being surrounded by three RailHawks, was able to charge at goal and roll the ball into the goal. Despite being at close quarters, none of the RailHawks were brave enough to get a foot in.

But the Eddies allowed the game to finish even. Zimmerman dashed through the midfield, towards the top of the FCE penalty area — and defender Paul Hamilton moved forward to cut him off. Hamilton blocked Zimmerman’s shot — but no other Eddie slipped in behind Hamilton to take the centre back slot he’d vacated. The ball came off Hamilton and back to Zimmerman, who now had a wide open path to goal, and slotted the ball in the corner.

Zimmerman had a chance to win the game late but was denied by a diving Parker.

Sinkgraven said the Eddies, despite being out of the race, still have a lot to play for.

“Still, you can win a lot,” said Sinkgraven. “The fans are there. And, the owner of the club is doing a lot of good things for us. So, you want to perform.”

“We scored two good goals,” said Porter, “but did, in my opinion, give up two bad goals.”