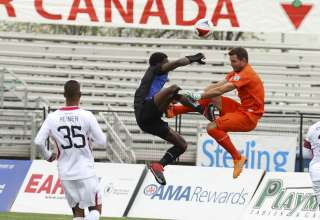 Sure, the Deltas might call California home, but the expansion team started three Canadians and have Canadian head coach Marc Dos Santos at the helm. When the Eddies and Deltas met Sunday afternoon at Clarke Field, there were 138 national-team caps between the players in both teams’ starting XIs. Counting the players on the benches, the number swelled to 153.

But, it was Delta Cristian Portilla who got the telling strike, a free kick that bounced in the Eddies penalty area and hooked inside the post, giving the Deltas a 1-0 decision in Edmonton. The Eddies, eliminated from the Canadian Championship on Wednesday, held a one-hour-plus team meeting Friday that included owner Tom Fath. But, the Eddies slid to 1-5-1 on the season after the loss to San Francisco.

Late in the game, Portilla got the free kick after Eddie Nik Ledgerwood brought down ex-TFC winger Jackson Goncalves. Portilla hooked the kick into the penalty area, and it looked like Delta Kenny Teijsse was going to get to it. So, keeper Chris Konopka had to play Teijsse and  not the ball. When the ball bounced in the area and Teijsse didn’t touch it, Konopka didn’t have time to react to the cold reality that the ball was going to skip into the corner of the goal.

“I think (Edmonton) is always a dangerous team, built in the right way” said Dos Santos. “That is a team that is just going through a bad spell. It happens to everybody and it could happen to us also, soccer is like that. But, I think overall, looking at the way we travelled, the mentality of the guys, the personality of our players, the character we have, we’ve conceded one goal in four games on the road. It shows a lot of maturity in our group. It’s not easy to do what we’re doing. We’re very proud of this run, we know that this a tough place to win in.”

The Eddies only lost twice at Clarke Field in 2016. In 2017, they’ve already dropped two games in three NASL home games; and it’s three out of four home games dropped if you count the Canadian Championship.

Eddies coach Colin Miller cursed the way the Eddies gave up the goal — he was displeased that they lost possession so easily and then conceded what he thought was an awful foul, then made the error of allowing Portilla’s free kick to bounce so close to goal. But he’s also distraught about the number of clear-cut scoring chances that the Eddies have missed.

“You can’t miss the chances we have and expect to win the game,” he said.

Right after the second half kicked off, Eddies striker Jake Keegan found himself on a break, with keeper Romuald Peiser at his mercy. But, in a spot where he needed to score, he got too fine and rolled a near-post shot wide.

“I was trying to send the keeper the wrong way, which I did,” said Keegan. “I just put it wide. I guess, too precise. But, probably from where I was, it was probably a tight angle to go near post, looking back on it. But, obviously, hindsight’s 20-20.”

The Deltas began the game brightly, with Canadian Kyle Bekker lashing a shot on goal from the top of the box that forced Konopka into a diving stop. Then, Bekker smacked a free kick that Konopka had to punch away.

The Eddies had a good chance to take the lead midway through the first half, as Dustin Corea dove to try and connect with a cross from Nik Ledgerwood. The problem was that Corea hit the ball too well as he dove; he made good contact, so it went right towards Peiser in the centre of goal. Had the ball sliced or hooked off his foot, it likely would have went towards one of the posts and had a better chance of beating the keeper.

Konopka was forced to make a good save on Tyler Gibson after the midfielder skipped past the attempted tackle of FCE’s Dean Shiels.

“I’m just gutted for the players,” said Miller. “I didn’t think we even deserved to draw the game, never mind lose it.”

Maxim Tissot, newly acquired by the Deltas after he and D.C. United mutually agreed to terminate his contract, was in uniform Sunday but didn’t play. Dos Santos said that Tissot had just arrived with the club, and he also had to design his lineup for Sunday’s game against the Eddies with an eye towards the Deltas’ midweek U.S. Open Cup match.

Dos Santos said Tissot was on his database of left-sided players he wanted to target as he built the Deltas roster. He was monitoring the situation at D.C. United, and Tissot was still at the top of his want list.

And he said that the NASL’s move this season to allow Canadians to be treated as domestics on the rosters of either Canadian or American teams has allowed him to consider more players from north of the border.

“People know how I feel about Canadian soccer, and how I feel about the Canadian players. But when I look for and choose players to fill up my roster, I don’t think about if they’re Chinese, Portuguese, Italian or Canadian. I think about quality players that can help us win games and I’m not doing a favour to anyone, I’m just choosing the best players possible. And, now that Canadians are no longer considered foreigners in the NASL, I think it’s intelligent on our part to look at who are the best Canadian players and give them opportunities. But I think the thing that matters the most to us is the San Francisco Deltas and we want to make sure the team is always strong.”