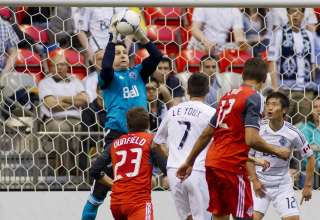 It is the nature of two-legged Cup ties that the first game is often forgotten. Quick. Think back to the first leg of the Chelsea-Barcelona Champions League semifinal. Doesn’t come back to you as quickly as that epic second leg, does it?

And when we think of the 2011 Voyageurs’ Cup final, we remember the second leg, not the first. The rainout and subsequent replay turned that second leg into a strangely epic affair, and Whitecaps fans still lament losing a second-half 1-0 lead because a downpour at BMO Field aborted the first attempt at playing the game.

Almost conveniently forgotten was the first leg, which the Whitecaps dominated in terms of possession and chances. But the ‘Caps squandered chance after chance and settled for a 1-1 draw, which set up TFC to take that home leg.

Fast forward to 2012: Again, the Whitecaps get a 1-1 draw at home. A 91st-minute wonder volley from Eric Hassli, which came just minutes after keeper Joe Cannon denied TFC striker Nick Soolsma a vital insurance goal on a point-blank chance, gave the draw a euphoric feel for Vancouver fans.

But, make no mistake: Even though the Whitecaps’ home legs of 2011 and 2012 had different feels — a game of wasted chances vs. a crazy comeback goal — the results were the same. Toronto FC escaped in each instance with a positive result — and a road goal.

After Ryan Johnson’s powerful header gave TFC the lead, it looked for much of the second half that the Reds would be a good bet to score a second. And Cannon did well to deny Soolsma and allow his team to keep breathing.

But the Cannon save and the Hassli goal are lipstick on the proverbial pig. Once again, the Whitecaps hosted TFC in the first leg of a Cup final. And, once again, the Reds leave with the advantage.

After next week’s second leg at BMO Field, no matter who wins, there won’t be much said about Wednesday match at B.C. Place. But, just like 2011, the Whitecaps’ inability to get a good home result has given TFC a glorious chance to win the Cup at home.