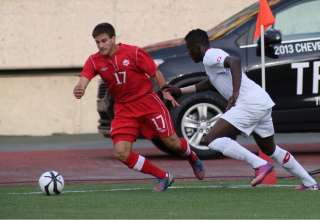 Back in 2013, Canadian striker Daniel Haber had left Maccabi Haifa and has joined Cypriot side Apollon Limassol. He’d just earned a national-team callup; he’d featured in a 2013 friendly against Costa Rica.

At that time, joining an MLS club was one of the furthest things from his mind. He wasn’t altogether impressed with the calibre of the league; after all,one of the reasons he left Cornell University was so he could put himself on the radar of European clubs rather than gamble on being lumped into an MLS Combine and possible SuperDraft.

But, after spending time at Cyrprus’s Ayia Napa FC and then back in Israel with Hapoel Nir Ramat HaSharon, Haber’s view of MLS has changed a little bit. In 2016, he decided to commit to a one-year deal with WFC2, the USL affiliate of the Vancouver Whitecaps. His goal? To make enough waves to attract the attention of an MLS side.

Haber came to Vancouver after getting a call from VWFC2 coach Alan Koch; in 2013, Koch coached the Canadian men’s team to a bronze medal at the Maccabiah Games in Israel; the Maccabiah Games gather elite Jewish athletes from around the world. As a teenager, Haber played for Maccabi Canada’s U18 team. Koch called to see if Haber would want to give the ‘Caps a shot.

“I was interested in coming back to North America, and Alan contacted me and told me that the USL team would be a good chance for me to get back into North America,” says Haber. “And I hope I can use this opportunity to see if I can push on into MLS.”

Haber had three goals and an assist in his first 11 matches for WFC2, and was getting regular playing time.

“The quality of USL is quite good, the teams that are part of MLS organizations, I think they play a more organized, attractive brand of soccer,” says Haber. “With those teams you have younger players and they play a more technical style.”

But why would a player who wasn’t interested in MLS just a few years ago now be pushing hard to get onto an MLS roster? Haber said the quality of MLS has improved noticeably in a short period of time.

“It’s much different than it was even two or three years ago. I am amazed at how different MLS is now. I used to watch Toronto FC. Then, when I came here, I was amazed at how good the quality of the play was even compared to just a few years ago. And, of course, I get to live in a beautiful city. I hadn’t really spent any time in Vancouver before and this is such a great place.”

As for USL, Haber said that if Europeans saw the league, they would he surprised at the level of play in what’s rated by the Canadian Soccer Association and the U.S. Soccer Federation as the third division of the pro game.

“I think the quality of play is very high compared to what the players are paid, when compared to the rest of the world.”