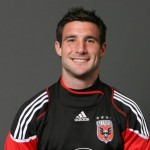 For the third week in a row, a member of D.C. United is the MLS Player of the Week.

Chris Pontius got the award this week, after his teammate — Canadian national-teamer Dwayne De Rosario — took the award over the last two weeks. Pontius was the top vote-getter in balloting from the North American Soccer Reporters.

Pontius scored twice as D.C. United crushed the visiting Vancouver Whitecaps by a 3-4-0 count, emphatically ensuring that the Whitecaps would keep their season-long winless streak on the road alive and well. But, before getting excited about a potential D.C. United return to its past glory, you need to take a good hard look at the teams it has played over the last three weeks.

Yes, DCU has scored 11 times in its last three games, but its victories have come against some of the worst backlines in the league — two against San Jose, three against Toronto FC, four against Vancouver. So, we’ll need to see D.C. perform against a real contender before we can say that the club is resurrecting the days of Marco Etcheverry and Jaime Moreno.

How The 11 voted: Couldn’t ignore the two goals from Pontius, so he got the first place vote.

The second-place vote went to, cough, De Rosario. After scoring five times over his last two games, De Rosario added two assists in the 4-0. He also hit the post and helped set up another goal with a clever dummy. De Rosario’s cross on Pontius’ opening goal was a thing of beauty, he danced through three defenders and was able to turn and deliver a perfect ball to his teammate, reminiscent of the days when he used to be a provider for Brian Ching during the days of the San Jose Earthquakes-Houston Dynamo dynasty.

DeRo now has nine goals and eight assists. He leads MLS with 29 shots on goal.