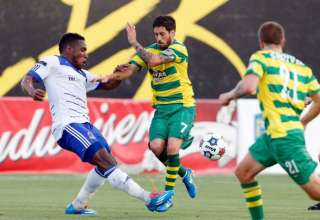 You’d have to excuse FC Edmonton coach Colin Miller if he pinched himself after FC Edmonton’s training session on Friday.

Miller had 20 healthy outfield players and three healthy keepers on the pitch. The only notable absence was midfielder Hanson Boakai, who is away with the Canadian team looking to qualify for the 2016 Olympics.

For a team that’s been ravaged by injuries and depleted by international call-ups throughout the NASL season, having close to a full complement of players on hand is well, almost a luxury.

And it couldn’t come at a better time. The Eddies host the spring-season champion and overall NASL leaders New York Cosmos Sunday. The team said that there are only about 200 or so tickets left for that match. Then, the Eddies go on the road to face the fall-season leaders Ottawa Fury and then the Cosmos, again. With the Eddies just two points out of the NASL’s final post-season spot, this three-game swing could very well be the defining stretch of their season.

“There are nine points out there, and I have a number in my head of the number of points I think we have to get,” said Miller.

But he knows the Cosmos will be coming into Edmonton not in the best of moods. The Cosmos were beaten 4-1 by Ottawa in a mid-week match-up.

“They poked the bear for us,” Miller said. “And the funny thing is I thought the Cosmos were the better team for much of that game. Ottawa’s keeper [Romuald Peiser] stood on his head for them.

“We know that the Cosmos are very good team and it’s a very good organization. But we also know that if we perform to a man like we did last weekend, that we can get results against anybody in this league.”

Edmonton went on the road and beat the Indy Eleven 2-0 last Saturday — an effort which saw the Eddies play one of their most complete games, front to back, of the season. The Eddies will need another no-man-left-uncounted effort Sunday, as the Cosmos can beat you in many ways. Sure, the tickets are selling because La Liga legends Raul and Marcos Senna will be at Clarke Field. But they’re not the only weapons.

“I mean, what can Colin Miller ever say about Senna and Raul, with the careers they’ve had?” said the coach. “But, if you focus too much them, they’re not the only guys who can beat you. They have a lot of players.”

Miller said that striker Lucky Mkosana “has been a different player” ever since he joined the Cosmos; and that left back, Ayoze, is a constant threat.

And, it will be almost surreal to see Raul on Clarke Field’s turf. Let’s face it; Clarke is a city facility that has temporary stands to make it close to NASL standards. To see Raul play in such an intimate venue, in a place where you also can see the 12-year-olds play league games.

But fullback Eddie Edward, who has played in the midfield over the last couple of games, says he won’t be distracted.

“It’s just another game. It’s a cliché, but we will take it one game at a time, one half at a time.

“Right now, I think we’re playing some of our best football since I’ve been here.”

UPDATE: So much for the Raul sightings. FC Edmonton confirmed Friday afternoon that Raul did not travel with the Cosmos this weekend. Officially, the Cosmos say that the Spanish star is being rested.