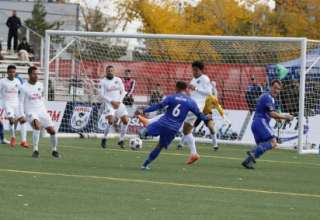 The New York Cosmos rotated the squad. FC Edmonton got the three points.

With a 2-1 win over the Cosmos Sunday at Clarke Field, the Eddies leapfrogged the Tampa Bay Rowdies and Fort Lauderdale in the overall standings. The Eddies now have possession of fourth spot, with five games left to go in the season. That fourth spot will represent the league’s final playoff position.

But there will surely be talk about how the Cosmos approached this game. After losing a midweek match to the Ottawa Fury, the Cosmos decided to leave several players at home rather than make the long road trip to Edmonton. Star attacker Raul, captain Carlos Mendes, fullback Ayoze and number-one keeper Jimmy Maurer were left behind. The Cosmos confirmed all those players were simply being rested.

With the Cosmos already assured of a post-season spot because it won the spring-season title, the club prioritized resting players over putting out the best XI available. And that decision will be magnified because it influenced a game that was vital not only to the Eddies, but the other teams involved in the dogfight for fourth.

Basically, the Cosmos found another way to put one over on the Rowdies and the Strikers.

But, early in the game, one of the Cosmos understudies made a major imprecation. Cosmos keeper Kyle Zobeck — in for Maurer —made a huge save. Pablo Cruz laid a perfect cross for Eddies striker Daryl Fordyce, whose headed effort was marked for the top corner. But Zobeck leaped and got his fingertips to it.

“I thought that it was going in,” Fordyce said.

But, with a stiff wind at their backs, the Eddies finally made a breakthrough late in the first half. Lance Laing got the ball on the left wing, cut inside, and then tried to play a pass to teammate Cristian Raudales. Cosmos defender Jimmy Mulligan blocked the pass, but the ball came right back to Laing who, all of a sudden, was clear in on goal. He slammed a shot into the bottom corner to give the Eddies the lead in front of announced crowd of 4,240.

Two minutes after Laing scored, Fordyce doubled the Eddies’ lead. The Cosmos were pressing deep in FCE’s end, but fullback Allan Zebie cushioned a fantastic pass to midfielder Dustin Corea. Then, Corea picked up his head so he could locate Fordyce, then made a defence splitting pass that was timed perfectly in concert with the striker’s run. Fordyce went in on goal, and slotted the ball past Zobeck.

At halftime, Cosmos coach Giovanni Zavarese said that a pair of “distractions” had cost his team two goals.

“Lance had the chance and he punished them,” said Fordyce “And then Corea makes the pass to me and I punished them. That was the difference in the game.”

The Eddies started the second half off well, with Corea lashing a shot at Zobeck. But, then, the Eddies made a series of unforced errors that basically gift-wrapped a goal for the visitors. Coach Colin Miller said the team “made a catalogue of mistakes” that led to a penalty.

First off, a free kick was played backward, then Zebie tried to play the ball back to keeper Matt Van Oekel. His pass was well off the mark, and so the Eddies surrendered a cheap corner. Off the corner, the ball came to Cosmos midfielder Danny Szetela, whose attempt was blocked by the arm of FCE defender Albert Watson. So, a penalty was awarded, and Marcos Senna converted it.

And while the Eddies had to defend deep late in the game, they held on. A few hearts leapt into throats when a long drive from Senna went through VanOekel’s hands, through his legs, but then sat near goal line. The keeper recovered and picked up the ball.

And, sub Ritchie Jones had a late chance cleared off the line. After a smart cutback from Sainey Nyassi, Jones had Zobeck beat, but the ball came off a Cosmos defender.

And he said that, no matter who the Cosmos put on the field, that New York has a very deep squad – that anyone wearing that white New York Cosmos jersey will be a quality player. And he noted that it marked the first time the Eddies had beaten the Cosmos.

Now, with just one home game left — and four on the road — the challenge for the Eddies will be holding onto that playoff spot. And Miller said he expects next weekend’s match — against the fall-season leading Ottawa Fury — to be something special.