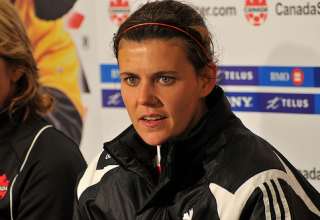 Photo by Jason Gemnich Christine Sinclair
Christine Sinclair
It’s sorta like Wayne Gretzky winning Hart Trophies in the 1980s. That is, Christine Sinclair being named Canada’s women’s soccer player of the year. On Thursday, she won the honour for the sixth consecutive time. Actually, she’s the only person to ever win the award. The Canadian Soccer Association launched the award just in time for Sinclair to begin her own personal dynasty. Playing alongside Brazilian star Marta, Sinclair led WPS in assists. Her FC Gold Pride won the WPS regular-season and playoff titles. Sinclair was Canada’s top scorer at the Gold Cup, which it won, securing a spot at next year’s World Cup in Germany. “Without a doubt, the highlight was winning CONCACAF with Canada,” said Sinclair. “It’s something we’ve never done before, with all the teams in it.” Right now, Canada is preparing for the final of the Sao Paulo tournament in Brazil, where it will face the hosts — including Marta — in the final. Already assured of a spot in the championship game, coach Carolina Morace rested Sinclair and a lot of the other regular starters for Wednesday’s final round-robin game against Brazil. Even with the second string playing, Canada drew 0-0 with the No. 3 ranked team in the world. Sinclair said this team is the best version of the national side she’s ever seen. “I think we have so much potential,” she said. “We can win CONCACAF, then come to play at this tournament [in Sao Paulo] and go the finals of this tournament. There’s no doubt in my mind that we can do damage at this World Cup.” And the big difference is Morace. Over the last two years, she has worked stop the slide of the national program that began under previous coach Even Pellerud, who preferred the women to thump the ball down the field and let Sinclair go chase it. Morace wants Canada to play a possession game, to use the midfield. Sinclair noted that Diana Matheson has flourished in the role of midfield general. “She allows us to make mistakes,” said Sinclair of the Morace renaissance. “She wants players to take chances, to take risks.” Sinclair has turned down offers to play in Europe, opting to stick with WPS. It keeps her close to her family in Burnaby, B.C. But, even though her FC Gold Pride dominated on the pitch, it did poorly at the box office and folded after a championship season. WPS still scuffles on, but women’s pro soccer in North America is still struggling to establish itself. And Sinclair, who has signed with the brand new Western New York Flash, admitted that she’s frustrated. “We have seen so many teams fold over the two years it’s [WPS] has been around. At the same time, more teams are coming in. This league is so important for soccer in North America. It would be a shame if it didn’t succeed. Here in North America, we need to show respect to the women’s league and respect to women’s sports.”
Load More Related Articles
Load More By Steven Sandor
Load More In Uncategorized
Comments are closed.