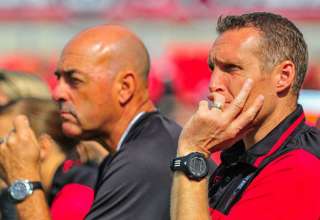 Martin Nash (right) as an assistant with Ottawa PHOTO: NASL

Martin Nash and Jordan Santiago have been unveiled as members of the Cavalry FC coaching staff.

Nash, the former Ottawa Fury assistant (and, hey, Edmonton Drillers alumni!) and long-time national teamer (Gold Cup winner) will not only be the assistant coach under Tommy Wheeldon Jr., but will also be the club’s technical director. Nash has been around the club for a while now, and was at Cavalry FC’s official launch earlier this year.

Santiago, a Calgary native who moved to Europe at age 16 but retired at the age of 22, will be the first goalkeeping coach in Cavalry history. Santiago had stints with Cardiff City  and Dutch side SC Veendam before making the decision to focus on coaching — a decision many young Canadian players have been forced to make in the past when playing opportunities at home are scarce.

“Everybody across the table is someone you can rely on,” said Wheeldon as the coaching staff was officially introduced to the media at a press conference Tuesday at Spruce Meadows.

The new staff will be getting to work right away, as the Canadian Premier League’s “Got Game” open tryouts begin later this week in Halifax. Six more trials take place across the country over the next couple of months. Wheeldon said that there are only a few of the 200 spots left open for Calgary’s event, which is set for Oct. 25-26. The way Alberta’s “autumn” has gone so far, there should be a couple of feet of snow for the 200 prospects to shovel before they hit the field.

Wheeldon said that the Cavalry’s plan is “to look at local first” when it comes to players, then across Canada and, finally, internationals. As for the internationals he wants: “They have to help the Canadians improve, and put bums in seats.”

He said that local players have a lot to offer, and that many Calgarians are technically proficient because of the long indoor season which forces them to play a lot of soccer at close quarters. He said the work comes in teaching the 11 v. 11 game.

So, as if running a CanPL club and the Foothills PDL side weren’t enough, maybe a winter Calgary team to join Mississauga MetroStars in MASL?*