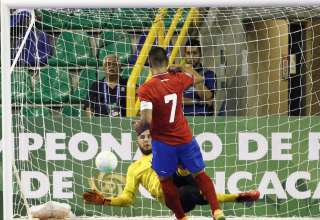 For a few precious days in the spring, the Canadian national futsal team became the darlings of this nation’s passionate soccer fanbase. And, at the centre of it all was a keeper who once plied his trade in Nicaragua…

Joshua Lemos is a pioneer. Before making futsal his full-time passion, he was one of the first Canadians to establish himself as a professional outdoor keeper in Latin America. He played for Uruguay’s Liverpool FC, then in Peru with AELU, and then spent a couple of years with Diriangén FC, one of Nicaragua’s most-decorated clubs.

“It was a good experience,” says the man who is now the undisputed No. 1 keeper for the Canadian futsal program. “The money wasn’t good if you transfer it to our standards there, but to live down there it was fine. And I always got paid on time.”

But, in his early 20s, Lemos realized that he preferred playing futsal over the outdoor game. And, his stock had risen; in Toronto, he was regarded as the best keeper in the gym.

“I thought, ‘I’ve got something going on here. There’s a lot more action, a lot more for me to do as a keeper, a lot more shots.”

Fast forward to 2016, and Lemos is a mainstay with the Canadian national futsal side. He backstops the team to a thrilling 9-7 win over the United States in a qualifier for the CONCACAF Futsal Championship — despite Canada falling behind 3-0 part way through the first leg.

When the Canadians went down 3-0, they gathered themselves. They calmed down. And they recognized that there was still plenty of time to come back.

“Step by step, shift by shift, we’ll get back into this,” said coach Kyt Selaidopoulos. “This is a group that leaves everything on the floor.”

In the team’s dressing room the mantra “ “It’s hard to beat a person that never quits.” was repeated over and over. The Canadians understood they were underdogs.

At the CONCACAF championships, Lemos was simply terrific. Canada faced the top ranked team in the region, Costa Rica, in their first Group B match. And, Costa Rica had home-court advantage. A blowout was expected; instead, the Canadians had a last-chance effort from Robert Renaud go just wide; had he converted, the visitors would have come out of that game with a shock draw. Even a 3-2 loss raised eyebrows — Costa Rica had shot after shot after shot, but Lemos came up with a series of sensational saves that would have made any soccer, hockey or water polo keeper proud. The best of them all? Probably the diving stop he made to stop Costa Rica’s two-on-none break.

After a win over Curacao, Canada faced Cuba knowing that a win or draw would qualify it for the Futsal World Cup for the first time since 1989. The Cubans were favourites, but Canada came out of the first half tied at one.  But, the Cubans came on with an onslaught in the second half, and took a 5-1 lead. They celebrated in front of the Canadians bench as if the game was over.

But then the Canadians roared back. Spurred by Vahid Assadpour and Frederico Moojen, two of the three players on the squad who play pro indoor in North America (but with the turf and boards), Canada got it back to 5-4.

Lemos roared out of the net to join the attack. He had scored for Canada before — in 2012, with Canada needing a win to advance to the CONCACAF playdowns, he got the last-gasp winner in a 7-6 triumph over El Salvador.

There would be no repeat in 2016; the Cubans crushed the comeback with two goals into Canada’s vacated net.

“It’s an elimination game, so you need to do whatever you need to do to get in,” recalled Lemos. “Going down 5-1, we were so disappointed. But we did what we did before against the USA, and we pulled back. But the thing about futsal is that it’s a short game, there’s not a lot of time. And we couldn’t get all the way back.”

Outside of the three pros — Assadpour, Moojen and Ian Bennett — the Canadian team was made up of amateurs from elite futsal leagues in Quebec and Ontario. The game still has not surpassed the traditional indoor turf-and-boards game in the rest of Canada. And that’s the challenge; futsal is regarded internationally as the indoor game of choice. The smaller ball, the court that allows the ball to go out of play. But many Canadians are still spending their winters with a regulation size ball and shoving opponents into the boards with the zeal of some of the dirtiest players hockey has to offer.

And, you can still play the indoor turf-and-boards game and get paid. The Major Arena Soccer League has teams throughout the United States and Mexico, and indications are that a Canadian expansion franchise will join soon. Assadpour is regarded as one of the MASL’s best players. Bennett was a second-team MASL all-star in 2015-16. And there is some translation of skills between futsal and arena soccer, despite the difference in playing surface and the size of the ball. Moojen, an MASL veteran, ended up being the top scorer at the CONCACAF championships.

“The indoor (arena) game, it’s fast,” said Lemos. “The ball doesn’t go out. There’s no rest. They play stop time similar to futsal. The ball is a different size but the surface is fast and you don’t have a lot of time on the ball. And the way those three played for us, well it speaks for itself.”

With the success of the Canadian team in 2016, getting oh so close to a World Cup berth, interest in futsal is growing. Selaidopoulos said that he’s heard from British Columbia, Alberta and the Maritimes about what’s needed to bring their futsal programs to an elite level. Look, anytime Canada beats the United States at anything — be it hockey, futsal, chess or darts — it’s news. It spurs Canadians to dream. And Lemos wants to be at the forefront of the futsal revolution. He dreams of a fully pro league in Canada.

“We felt not only the support from the people but from the CSA,” he said. “They’ve put a lot more into the program. It showed a lot. There were more staff, more commitment, more resources. They’ve shown that they are taking futsal seriously. This is all good for the game.

“For younger players, I hope to see a time when they know they can go to top leagues, that they are Canada’s future. People have to grow the game, and that means more leagues across the country, maybe one day there will be an MLS for futsal. That would be incredible.”

If Lemos was playing as a full-time futsal pro, the pioneer would definitely have placed his flag in the Canadian soccer landscape.