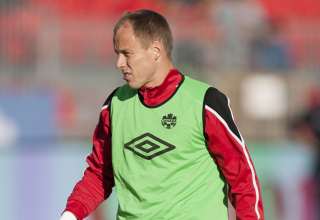 First of all, he knows very little about the opposition that has only fielded its senior team just once in 2012 – a 1-0 loss to Bolivia in late February. The Caribbean island nation did play two games less than a week earlier in Jamaica that Hart attended with his coaching staff. But, much to his surprise, the scouting trip turned out to be in vain as Cuba did not exactly bring its “A” squad.

“It’s been very limited to be honest, they haven’t played much,” said Hart at Tuesday’s practice. “We went down to see the two games they played in Jamaica, they actually brought the under-23 team so we really don’t know much about what the senior team is doing.”

So Hart has very little to work with to show to his players what to expect in regards to the style of game Cuba will play. But the players are not concerned and are only worried about playing its game.

“We haven’t learned so much about them,” said striker Tosaint Ricketts. “We haven’t really tapped into what they’re doing and their system. I think if we just stick to our game plan and just worry about ourselves attacking and defensively, we’ll be fine.”

Captain Kevin McKenna is a veteran, having played in numerous CONCACAF countries, and knows what to expect when his team takes the field on Friday. In fact he is the only player on the squad that was part of the team that last travelled to Cuba for an international match, but unfortunately never came off the bench.

“Three World Cup qualifying (tournaments) ago we played them home and away and I remember the stadium. It’s not the greatest pitch,” said McKenna of a 1-0 win in Havana in 2000.

Hart considers the pitch his biggest concern but is weary of the heat playing a big impact on the match as well. The coach selected Florida for the location of his training camp to mimic the conditions and heat that will be experienced in Cuba. However, coming back to the unusually cold and rainy Toronto for the friendly against the U.S. may have undone the heat training.

“I think we might have to go in the sauna because it’s been really cold here and all the work that you did in the heat hopefully it can transfer,” said Hart. “But two o’clock heat in Cuba, it’s going to be an issue but not an issue —we have to play.”

McKenna, like his coach and rest of his teammates, was surprised with the early start and considered it a player safety risk as well.

“We’re kicking off at two o’clock in Cuba – if anybody had any common sense obviously you would kick off later,” said McKenna. “And you’re talking about players’ health as well and maybe CONCACAF should have stepped in there but they didn’t so it’s a situation we have to deal with.

“The heat is going to play a big part in the game and we need to be clever out there. We need to let the ball do the work. It’s going to be a big factor but we have to deal with it.”

Canada may have some luck on its side as the current forecast for Friday is calling for rain and thunderstorms but the temperature will still hover at 30 C. But if it does rain or at the very least remains cloudy then the hot sun will be a non-factor.

Hard pressed to make it out of its own group, McKenna feels that the early start was just Cuba’s way of finding any advantage it can get, not unlike a hostile stadium and theatrics of the expected diving that will likely take place on Friday in Havana.

“No, it’s all part of the game. It’s their way of trying to get a little advantage. Whether you’re in Panama, Honduras, Cuba or anywhere they’re always going to be looking for that little advantage.”

The Cubans will almost surely resort to flopping around the pitch to goad the referees into making phantom calls, but as a veteran, McKenna stressed the need for the team to keep its collective composure and not overreact — something that has been an issue in the past.

“Over the last few years, maybe I wouldn’t say we overreacted because we had some bad decisions go our way but we got to keep our heads,” said McKenna. “They’re big games for us and the team just needs to realize that teams are going to do everything to win games and we need to be aware of that.

“It’s something we’ve dealt with in the past, maybe not dealt with it in the right way, but this time we need to be professional about it and get on with the work.”