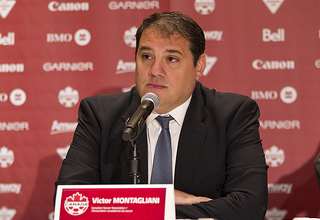 Canadian Soccer Association president Victor Montagliani says he’s confident that we’ll see reforms made to roster rules in both MLS and NASL before the end of the year.

Montagliani, who is also CONCACAF’s president,  said discussions with MLS have been positive, and he’s expecting some kind of solution to the problem to be announced before the end of the season.

“My confidence is high that we will resolve the issue,” he said.

In the past, MLS Commissioner Don Garber has said that labour laws in the United States don’t allow American employers to give preferential treatment to Canadians over other foreign workers. Meanwhile, NASL Commissioner Bill Peterson has said that roster disparities were “a federation issue.”

Currently, there are only six Canadians playing for American teams in NASL and MLS combined — and some of those have dual citizenships or green cards (Carolina’s Drew Beckie, FC Dallas’s Tesho Akindele, Fort Lauderdale’s Nana Attakora, for example) that allow them to be treated as American domestic players.

“Seeing the dichotomy that exists between USL, MLS and NASL has always been a head-scratcher,” said Montagliani.

Montagliani said whatever the solution to the issue will be, the changes will affect MLS and NASL.