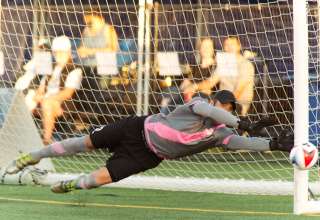 Daniel Fernandes grew up just a couple of blocks away from Clarke Field. He remembers walking past the stadium day after day. He kicked his first ball in Edmonton.

On Wednesday night, now the starting goalkeeper for Rayo OKC, Fernandes returned to his hometown for what he admitted was the most special game of his NASL career. Rayo OKC got out of Edmonton with a 0-0 draw thanks to an outstanding performance from Fernandes, who was a Canadian U-20 player before switching his allegiance to the Portuguese national side.

“It’s a great feeling,” said Fernandes after the game. “A lot of memories of walking down here in the park, going by Commonwealth Stadium [next door to Clarke]. It was fun. I felt like I was in my backyard today.”

The Eddies sure weren’t happy that Fernandes was having so much fun. Coming off only their second home loss of the season, the Eddies pressed OKC early in the first half. Nik Ledgerwood was moved into an advanced position to press the ball. And Rayo OKC fullback Moises Hernandez had a hell of a time trying to contain Sainey Nyassi’s speed on the wing.

Fernandes’s good evening started off with a bit of good fortune. Eddies winger Ben Fisk took a ball from Nyassi, then drilled a shot off the post. It marked the second consecutive game that Fisk had hit the woodwork.

But Fernandes went to work later in the half. Cristian Raudales ripped a shot from 20 yards out that went through a maze of players in the box. It was headed for the bottom corner and, because of bodies in front of him, Fernandes didn’t see it till late. But he stretched as far as he could, got a hand to it, and pushed the shot just outside the post.

Rayo OKC’s netminder wasn’t done; in the second half, he made what could have been called an even better save, running across his goal and leaping to get a hand to Tomi Ameobi’s shot that was headed for the far corner.

“I thought it was going to sneak into the bottom corner,” said Ameobi. “But the keeper got a great hand to it.”

“I’m disappointed,” said FCE coach Colin Miller. “I thought their keeper stood on his head… It’s the second game in a row where the keeper has been the difference.”

Rayo had one great chance late to steal three points out of its Alberta trip. Former Toronto FC striker Robbie Findley’s shot deflected off defender Albert Watson and looped off the crossbar. But, had it gone in, it would have been cruel to Edmonton, who had created more chances on the evening.

Miller made several changes; Pape Diakite, the centre back who had made some critical mistakes in the last couple of games, was given the night off, with Karsten Smith coming in at centre back. Raudales came in at holding mid for Nico Di Biase, who made an error that led to a Miami FC goal on Sunday. And Daryl Fordyce, after missing Sunday with knee problem, played his 100th game for the Eddies.

But this was Fernandes’s night.

“Today was special, even for my family. They’re in Vancouver, they had no chance [to come to Edmonton] because of work. But it was something. It touches my family and me. It’s amazing, eh? How the soccer world can bring you back right to your backyard. If I didn’t play soccer maybe I’d never come play here and have this moment.”

And it’s bright spot for a Rayo OKC team that’s endured the resignation of a head coach, an ownership dispute, a front office shuffle and even a battle between owner over the artificial turf that makes up the club’s home field.

“I think ‘tough’ defines it all,” said Fernandes. “It’s a new experience. But, at the end of the day, in football you are getting paid by a club and you have to grind through it — and do the best you can. It’s a experience, for sure no one wants to go through it, but you can only learn and nothing more. And hopefully, it doesn’t happen again.”