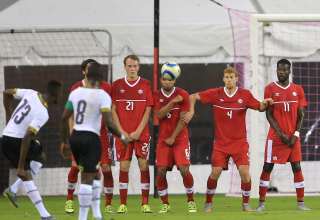 On Tuesday night, Canada’s men’s national team played Ghana in a friendly in Washington, D.C. while the Canadian U-23 team played the United States in the third-place game of the CONCACAF Olympic qualifying tournament.

The U-23s, who had national-program coach Benito Floro with them in Utah, were reduced to 10 men before halftime, and gave up two second-half goals. The Olympic dream is over with a 2-0 loss to the Americans; by taking third, the U.S. goes into a playoff with Colombia for a spot at Rio 2016.

For the Canadian senior team, playing Ghana represented the last tune-up ahead of the Nov. 13 World Cup qualifier against Honduras. For Canada, it was all about bringing in new faces, including Fraser Aird and, ahem, Junior Hoilett. As well, Lucas Cavallini was welcomed back into the Canadian fold. And youngsters Sam Adekudgbe, Marco Bustos and Kianz Froese were also given a decent run out.

Canada drew Ghana 1-1; Marcel de Jong scored a first-half screamer from distance, a shot we can only hope his bosses at Sporting Kansas City were watching. Maybe it will help de Jong fight his way back into the side. Ghana equalized right before halftime and had plenty of chances late to win the game, as the Canadians looked to work on bunkering. Don’t snicker; it’s something Canada needs to work on for those road games in CONCACAF qualifying. Still, Ghana missed a few very good chances from in close.

So, what to take from both of these matches?

Giuliano Frano got the start for the U23s at right back, and he learned a very important lesson about playing in CONCACAF: Don’t think you can get away with anything when it comes to the referee. After committing a foul, Frano said something that the Mexican referee Luis Santander picked up on — and the yellow card came out. Problem was, Frano was already on a yellow, so off he went. That was the moment that changed this game. This is CONCACAF, don’t expect the refs to be patient or to hear you out. Put your head down, shut up. Most CONCACAF officials relish the chances to make themselves the show.

Finally, after laying siege to the Canadian penalty area, Marc Pelosi’s shot from the top of the box found the net after 68 minutes. The goal came off a corner, and left back Jeremy Gagnon-Lapare — who has been mentioned many times for all the wrong reasons through this tournament — was on the line. The ball came close to him, and he chose to try and clear it off the line with an acrobatic leap and kick. From the camera angle, it was hard to tell if Gagnon-Lapare was screened or not — but could he have shuffled a step or two to take that shot off the body instead? Not to sound too much like a hockey commentator famous for interesting wardrobe choices, but this is a spot where you do what you can to get in front of the ball — no matter what. Again, it’s hard to tell for sure if Gagnon-Lapare was struggling to see the shot or not.

Still, the fullbacks are a hot topic, as they have been all tournament. Or, more like, the lack of fullbacks. Floro had other fullback options available, chose not to select them, and instead went with a very thin corps in the back. He employed makeshift, converted fullbacks. Gagnon-Lapare has become the whipping boy of this team, and it’s a bit unfair. It’s not where he’s supposed to play, it’s not fair to keep sending him back there. Those questions have to fall to Floro.
By the time Jerome Kiesewetter converted a late penalty, Canada was out of gas.

HOILETT IMPRESSES: As stated earlier, this friendly against Ghana saw a lot of Canadians making their debuts for the senior team. But, of course, there’s one player who was going to be under more scrutiny than all of the others combined — and that’s Junior Hoilett.

Hoilett didn’t look like a player who was on the periphery at Queens Park Rangers. He didn’t look like someone who had cynically decided to play for Canada because his club career had slid. No, he looked passionate, committed, and damn quick.

Wing play has been an issue for Canada, so to see Hoilett make several dashes down the left side, as he used to for Blackburn and, later, QPR, was hopeful. Early in the game, he forced a great save as he made a run down the left channel, cut inside and then unleashed a shot from the top of the box. And, it has to be said, Canada finally looked to have a support player who could match striker Tosaint Ricketts for speed. It creates a new dimension, because Canada could actually, at times, force the pace of play. And we haven’t been able to say that too much, well… since…