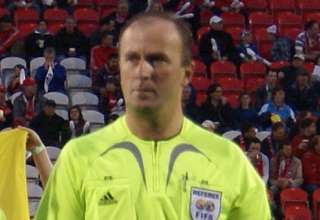 Canadian Silviu Petrescu has been named MLS Referee of the Year.

According to the voting stats released by MLS on Tuesday, Petrescu got exactly half of all the media votes tallied, 34.55 per cent from the clubs and 36.78 per cent of the player votes. So, more than one in three players think that Petrescu is the best official in the league.

Petrescu will work the MLS Cup finale between Los Angeles and Houston.

Petrescu worked 20 MLS matches this season, including the wild-card playoff match between the Los Angeles Galaxy and Vancouver Whitecaps, which was decided on a Landon Donovan penalty-kick goal. On that play, Petrescu ruled that Whitecaps defender Martin Bonjour had fouled Donovan in the area. It wasn’t an easy call, as Donovan was leaning into Bonjour as he went forward into the box, putting the defender in a no-win situation: Either let Donovan go by, or know that, no matter the contact, Donovan will go down.

Petrescu only sent off one player in MLS action this season: New England’s Stephen McCarthy in a March 17 match that saw Sporting Kansas City use the extra man to stomp the Revolution by a 3-0 count. And, outside of the Vancouver wild-card match, Petrescu only called one other penalty all season long. That came in Toronto FC’s 3-2 loss at Real Salt Lake on April 28; and TFC’s Torsten Frings failed to convert from the spot in a 3-2 loss.

Petrescu also administered the second leg of the final of the Amway Canadian Championship, and has been a regular choice for CONCACAF Champions League assignments. He also officiated a June friendly between Brazil and Mexico at Cowboys Stadium in Dallas.