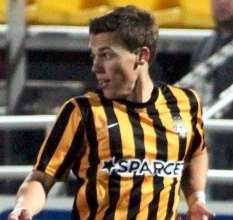 The Whitecaps lost in Dallas Saturday night, but the team did get some news from another part of the United States.

Canadian midfielder Ben Fisk, who the Whitecaps just sent out on a season-long loan to the Charleston Battery of USL-Pro, quickly endeared himself to the fans in South Carolina. Fisk set up a goal and scored another as the Battery battered the visiting Antigua Barracuda by a 4-0 count, in what was the Charleston home opener. And Fisk did all of his damage in the space of just a little more than two minutes.

In the 21st minute, Fisk supplied the lobbed ball that teammate Heviel Cordoves coolly finished to give the home team a 1-0 lead. Then, in the 23rd, Fisk made it 2-0 after a great run down the left side.

It was Fisk’s second game for the Battery since the Whitecaps made a deal to send prospects Emmanuel Adjetey to the USL-PRO side for the 2013 season.

Fisk played 45 minutes in a 4-1 loss to the Richmond Kickers. That game had some more Canadian links, as ex-Whitecap Philippe Davies came on as a 90th-minute sub for the Kickers.