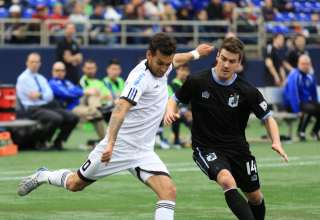 Shaun Saiko, left, gets a shot off in front of Minnesota's Brian Kallman.

FC Edmonton has a new coach and an almost entirely new starting XI. But Saturday’s 2-0 loss on the Metrodome turf to Minnesota United FC felt a lot like the 2012 season.

The Eddies had a lot of the ball, but created precious few chances, and struggled to find space against a more physical team. The match was played in a constant state of stops and starts, with no real flow. And that favoured Minnesota, which thrives on set pieces and winning 50-50 balls.

“I thought that we were on top for long spells. We were well organized. I feel as sick after this match as I had after our first two matches.”

So similar to last season, Edmonton spurned an early chance — teasing its supporters that more might be coming. And they didn’t come. Yes, Edmonton had lots of possession, but couldn’t unlock the MUFC defence.

In the second minute, FCE’s Michael Cox flicked the ball ahead, into the path of teammate Daryl Fordyce. The deft header set Fordyce free behind the line, but he placed his shot too close to keeper Daryl Sattler, and the save was made.

But, the early chance didn’t set off a track meet. Minnesota, with the marquee strike pair of Etienne Barbara (injury) and Pablo Campos (suspension) not available for the match, did what it does best, turning the match into a war of attrition, turning every inch of the field into territory that had to be won. The game didn’t feel like it was being played on turf, but in quagmire.

The stalemate which was finally broken in the 29th minute — when the referee awarded a penalty to Minnesota after a corner kick was delivered into the FC Edmonton penalty area. At halftime, coach Colin Miller said the referee had “lost the plot” by awarding that penalty, and by his eagerness to brandish yellow cards to both sides.

“If they don’t get that, they don’t even look like scoring in the first 45 minutes,” said Miller.

Simone Bracalello buried the penalty kick inside the post, on what was MUFC’s only shot on goal through the first half.

Edmonton, though, had only one other half-chance note — a long-range volley from midfielder Robert Garrett. The Northern Ireland international made his NASL debut after arriving in midweek after his parent club, Belfast’s Linfield FC, agreed to loan him to the Eddies for the rest of the season.

Miller also was forced into his substitutions. Midfielder Wes Knight had to leave the match just 17 minutes in, forced out with a leg problem. Massimo Mirabelli came in on left wing, with Shaun Saiko forced to move from left to right. Garrett was never going to make the full 90, considering he’s just arrived from across the Atlantic. He made it to the 65-minute mark, coming off for Chris Nurse. And fullback Edson Edward had to be removed after 65, favouring a problem ankle. Antonio Rago came in for him. Miller said that he felt like Rago did an excellent job after he came into the match.

“I felt good for the first 45 minutes,” said Garrett — but added that he felt out of breath as the second half went on.

“I felt the quality of play was very, very good,” Garrett said of his first NASL match. “A lot of balls played on the ground.”

Edward has a suspected twisted ankle, but Miller warned that Knight could be out for a significant amount of time. Knight left the Metrodome on crutches, and heard something pop in his foot.

After FC Edmonton had a series of four corners that didn’t amount to a shot on goal, Minnesota pushed forward. And, like so many times we saw in 2012, the Eddies were caught losing physical battles in the box. Off a free kick, a long ball was thumped forward into the Eddies’ penalty area. Minnesota’s Aaron Pitchkolan won the ball at the far post, and headed back across goal to the near post, for Lucas Rodriguez to finish. Minnesota has scored the insurance goal after winning the first and second balls in the Edmonton penalty area.

The Eddies had showed some signs of a renaissance in their first two matches of the season, creating numerous chances in a draw with Fort Lauderdale and a loss to Carolina. But, Saturday’s game felt like deja vu – for all the wrong reasons.