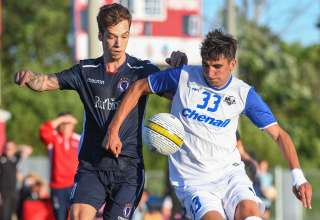 League1 Ontario commissioner Dino Rossi believes that the league’s men’s and women’s divisions will soon be a proving ground for not only the best players in his home province, but from across Canada.

Obviously, Rossi was feeling mighty bullish Wednesday, with the announcement that the Ontario division-three league had been acquired by the Canadian Premier League. While Rossi says the status quo will remain for the 2019 season, once the relationship with the new owners are better established, L10’s scope and reach will only grow.

“I want this league to be a platform for the best Canadian footballers, period,” Rossi said.

L10 has helped develop some of Canada’s brightest young talents. Players like Besiktas’s Cyle Larin, LAFC’s Mark-Anthony Kaye and the Chicago Fire’s Raheem Edwards have played in the league. But, if the league is to be a feeder for a national Canadian Premier League, there will be more opportunities for elite players from coast-to-coast.

To do that, Rossi said teams will need to focus on helping players get housing and transition to their new homes. For example, the teams could try to help players find part-time work.

And, yes, Rossi does see a future when some of the league’s teams could aim to move to the Canadian Premier League. The league has been public that, if it grows, it supports a move to promotion and relegation.

“I think there are a lot of our teams that have catchment areas that could support full professional soccer,” said Rossi.

But, expanding the league’s scope, the possibility of teams moving up, those are long-term things. For 2019, we shouldn’t expect to see too many changes.

“In the short term, the status quo will remain,” said Rossi. “Right now, the Canadian Premier League has their hands full with all that comes with launching a new league. Teams are stocking their rosters. So, we will be bringing them up to speed on everything that we do. Then, we will focus on alignment. The question: How do we make this league an engine for development?”

Rossi said that the women’s division was a key part of the deal. He said the CanPL brass showed a lot of interest in L10’s women’s program.

But is the deal a kick in the pants for the other provinces? Is this a signal that, if they don’t start putting together some sort of ladders or pyramids in their provinces (or regions), that they’ll fall behind?

“I think this is a validation of what we have been doing for the last five years,” Rossi said. “That being said, Ontario is a different beast. What we have that works here may not be what works in Alberta or British Columbia or Nova Scotia.”