February 08, 2023
9 New Articles
Home Global Game CONCACAF Canada preps to play on a poor pitch by training on an even poorer one 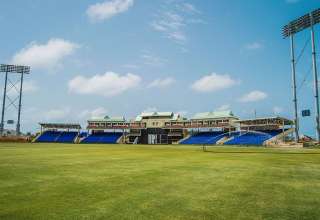 Most of the time, the rule of high-performance soccer programs is that they train in the best possible facilities.

But, when you have a meaningful game, on the road, on patchy grass in a cricket ground, training on a pitch that could be mistaken for a golf green isn’t the best idea. You want to train on a bumpy, unforgiving surface that will prep you for the unexpected.

So, Canada is prepping for Sunday night’s Nations League qualifier at Warner Park in Basseterre, St. Kitts and Nevis by training on a barely passable pitch.

Coach John Herdman said that the camp was scheduled so players would get the best possible opportunities to get used to the hot, humid weather and a playing surface that likely won’t allow the ball to roll true.

“We had a few days in Miami, to reduce the impact of the environment,” said Herdman. “Then, we connected with a local club (in St. Kitts and Nevis). We spent a little money upgrading their facilities.”

But, don’t think that little bit of money turned the pitch into the Emirates. That wasn’t the point. The team has spent days on a pitch that isn’t the best. The thinking is that when Canada does walk onto the surface at Warner Park, the players will see that cricket field as an upgrade.

“We know that where we’re training at is way worse than the surface at Warner Park,” said Herdman.

The coach said the plan, to come to the Caribbean early and make a home base there, “it takes a bad pitch out of the equation.”

Both Canada and the Kittitians enter the game with perfect records after two matches each. Herdman has said that he expects a much tougher match for Canada than the first two qualifiers, against the U.S. Virgin Islands and Dominica, respectively. He sees the Kittitians as being in the second tier of CONCACAF nations.

Canada needs to finish in the top six out of the 34 qualifying nations to earn a spot in Group A of the CONCACAF Nations League proper, which would see the Canadians rubbing shoulders with the likes of the United States and Mexico.

“If we don’t make Group A, we’ll spend the next couple of years flying around the Caribbean,” said Herdman. He said that not making the top flight would mean a lot of games in island locales that would “build resilience” but wouldn’t offer the competitive level Canada needs if the program is to grow.