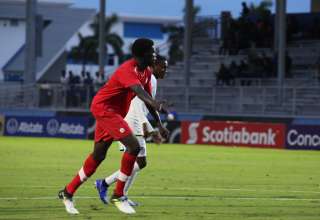 After a weather delay in Bradenton, Fla. delayed the kickoff of Canada’s opening match at the CONCACAF U-20 Championship by nearly an hour, Noble Okello Ayo brought the thunder.

The Toronto FC prospect had a first-half brace and Canada went on to beat Dominica by a 4-0 score.

Canadian coach Andrew Olivieri kicked off the tournament by starting the twin towers of Ayo and Bair at the top of his attack. Chances aplenty fell to both players, as Canada hemmed the Dominicans in their final third. The Dominican defenders simply tried to smash the ball in any direction, save towards their own goal, in order to clear their lines. And, because Dominica’s defending was do desperate, the island nation’s lone striker, Zion Lander, was left to simply run around chasing shadows.

In the first half, Bair and Ayo had very different levels of success. Bair had a shot strike the crossbar, and a couple of attempts led to sprawling saves from Dominica keeper Tafarie Elie.

But Ayo got two goals for his efforts. The first one he smashed in from the top of the box after a layoff from FC Dallas draft pick Adonijah Reid; the second he poked through Elie’s legs after a clever dummy from Bair allowed the cross to roll to Ayo’s feet.

Emile Legault, playing on the right side, was effective through the first half, able to get around the Dominica back line over and over and deliver crosses into the box.

Reid was robbed by Elie in the 74th minute, as the keeper guessed right and made a diving stop after the Canadian got onto a through ball and shuffled past a defender.

But Reid got a measure of revenge late in the game when he came in from the left wing, danced around a couple of defenders, left the keeper sprawling, then squared the ball for Jose Hernandez to deposit into an open goal.

Bair finally got his goal on a breakaway just seconds after Hernandez’s goal.