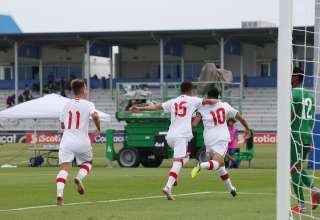 A trio of subs helped Canada made a great escape in Sunday’s action at the CONCACAF U-20 Championship.

The Canadians needed a late second-half goal from FC Dallas draft pick Adonijah Reid to save them some serious blushes — Canada got out of the match with a narrow 2-1 win over Guadeloupe.

Coming into the match off a 4-0 win over Dominica, Canada was expected to have little trouble with Guadeloupe — and coach Andrew Olivieri left his twin-tower strike force of Theo Bair and Noble Okello Ayo on the bench to start the game.

But he had to bring in both of them in the 65th, with the score tied 1-1. Ten minutes later, he brought in Reid.

The subs paid off, as it was Okello who pushed a ball past the Guadeloupe backline for Bair to run on to. Then, instead of shooting, Bair slid the ball across the face of the goal for Reid, who had a half an open net to shoot at. He didn’t miss.

In the new format introduced for 2018, the 35 teams in the CONCACAF U-20 Championship are divided into six groups. Only the six group winners advance to the next round — and keep their hopes of qualifying for the 2019 U-20 World Cup alive. With seeded Panama in its group, Canada simply cannot afford slip-ups against the lower seeded Caribbean federations

Canada started the game well enough, with Mathieu Choiniere giving his side the lead just seven minutes in, as hs deflected shot nestled inside of the far post.

Dante Campbell was close to making it 2-0 before the break, but the ball was cleared off the line.

But, Canada was caught napping early in the second half. Guadeloupe forward Luther Archimede got behind Canadian centre back Julian Dunn-Johnson. Keeper Alessandro Busti came off the line, but couldn’t get there in time as Archimede got to the ball first and pushed it under onrushing goalkeeper and into the goal. Canada was stunned.

Campbell had a chance to give Canada back the lead, but Guadeloupe keeper Erwan Regulus leaped to palm away his free-kick effort.

Finally, though, Canada got the break it needed late in the game. Still, it needs to be noted that Canada didn’t move the ball nearly as well as it did in the opener against Dominica, and allowed the pack of Guadeloupe defenders time to organize and reorganize. And, unlike Dominica, Guadeloupe did show some teeth on the counter, with Archimede providing a dangerous target that possessed a mix of size and speed.

It was an escape, but not an impressive one. Canada has a lot of work to do.