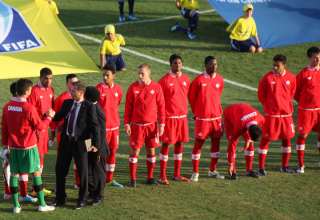 Sure, it’s disappointing that the Canadian side couldn’t hold on to a 2-1 lead against Austria in their U-17 World Cup opener.

A 2-2 draw was likely a fair result based on the run of play in Saturday’s group-stage curtain raiser for both sides. Both teams hit posts. Both sides entertained with positive play.

And, that’s the hope for Canadian supporters, isn’t it? After struggling to see Canada’s national team go scoreless in eight straight matches, it’s refreshing to see, at the youth level, that there are some truly creative players.

Both sides could have had more goals. Canadian midfielder Marco Bustos had a fantastic first-half effort denied by the fingertips of Austrian keeper Alexander Schlager. And, with less than 20 minutes to play and the score level at 2-2, Bustos saw his drive go off the bar.

Hanson Boakai also had a chance on the break just before halftime. But he was also denied by Schlager.

Meanwhile, after Sascha Horvath gave the Austrians a 1-0 lead with a 28th-minute blast that came off the underside of the bar and across the goal line, there were chances to double the lead before the half. Daniel Ripic had the two best chances, both coming down the right channel. Canadian keeper Marco Carducci did well to come off the line, cut down the angle and block one Ripic effort, and was happy to see Ripic’s second attempt of the half go off the post and stay out.

Canada got its equalizer thanks to some great close control from Jordan Hamilton. The Toronto FC prospect was able to control a cross from Bustos, and then was able to knock the ball down from his chest, turn and score — all with a defender draped on him. It’s these individual displays of power and skill that could be the cause for hope in the Canadian program.

Elias Roubos gave Canada the 2-1 lead in the 58th minute from the penalty spot, his marker coming just five minutes after Hamilton equalized.