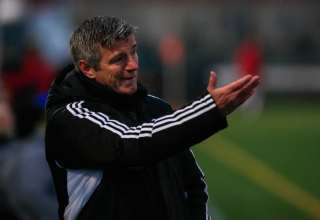 One thing Colin Miller doesn’t want to see after FC Edmonton’s match this Sunday in New York is a trophy presentation.

If the Tampa Bay Rowdies and Atlanta Silverbacks both win their matches Saturday, it will be up to the New York Cosmos to win its game against FCE Sunday. If the resurrected Cosmos team does get the three points, it will clinch the NASL fall-season title, and can spend the last two weeks of the season prepping for the Soccer Bowl in Atlanta.

But, FCE coach Miller says his team doesn’t want to have to sit and salute the winner of the fall (Trophy? Dish? Serving plate?). The Eddies want to force the Cosmos to wait a little longer.

“No, there’s no way we want to see the trophy (presented),” said Miller after FCE’s training session Friday on the grass at Concordia College. “We’ve had a very good week, we’ve had to make one or two changes in personnel. And, anyone who is not motivated to go to New York and play the Cosmos, well that would be hard to believe.”

Miller said he had the chance to review the video of the only other time the Cosmos and the Eddies have met, a 1-1 draw at Clarke Stadium that saw former Spanish national-team scorer Marcos Senna score a late free-kick equalizer after a hotly contested hand-ball decision levied against FCE defender Albert Watson.

“I’d say for 85 per cent of the game, we were on top, we created a lot of good chances. Up until maybe the last four or five minutes of the game, the Cosmos, as good as they are, didn’t create a lot of problems for us.”

Miller said there’s been a few times in his career when he’s been a part of upsets or “spoiler” results. He still speaks about those times with satisfaction.

In 1994, he was part of the Canadian national team that drew Brazil 1-1 at Edmonton’s Commonwealth Stadium, in a few short weeks after that game, Brazil would go on to win the World Cup.

“Everyone thought we’d be punchbags for them,and we weren’t.”

He also remembers being with a Dunfermline squad which beat Dundee United 1-0 on the second-last week of the 1995-96 Scottish Championship season, preventing the opponents from clinching the title and a spot in the Premiership. Not only did Dunfermline spoil the party, they actually came from behind and stole the title from Dundee United, much like the Atlanta Silverbacks did to the Carolina RailHawks in the NASL spring season.

And Miller also remembers scoring for Hearts in a 1995 Scottish Cup match that knocked out Rangers, the Scottish club that signed Miller in the early ‘80s. Miller scored on a low 30-yard free kick that snuck inside the post that gave Hearts a 1-0 lead.

“A lot of people complained that I didn’t celebrate the goal. I just ran straight back.”