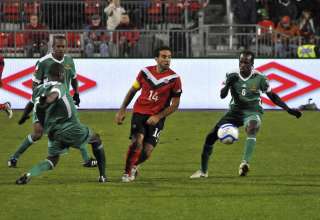 Stephen Hart got his wish.

The Canadian national head coach watched his team put together the complete performance he was looking for as Canada routed St. Kitts and Nevis 4-0 on Tuesday night.

Hart was said before the match that the team owed fans a good performance. Well, the 10,245 fans at BMO Field were treated to four goals by the home side, led by captain Dwayne De Rosario who tied Dale Mitchell for the all-time goals lead for Canada with 19. Olivier Occean, Josh Simpson and Tosaint Ricketts added the other markers.

Canada looked like a completely different team from the squad that played to a 0-0 draw on Friday night in St. Kitts and Nevis. The team came out with a quick start and pressured the Caribbean nation from the opening whistle.

“Different mindset,” said Hart. “As I said we owe it to everybody and our mentality right from the kickoff was to put them under pressure and create opportunities, either secondary opportunities or through our passing, and be a little more composed in front of net. We got the goals and we could have got a lot more, but I’m glad the chances are coming.”

“In all honesty, I think St. Kitts ran themselves ragged in the game in St. Kitts. They threw everything at that one game and they felt it tonight.”

The team held a meeting on Monday to ensure that everyone came out with a much better effort than the game on Friday night.

“Yesterday we had a meeting (decided) and we just got to do it for the fans,” said Ricketts. “Last game wasn’t our best game and tonight we wanted to come out to BMO show on Canadian soil that we can get the job done and it was a great game. I’m proud of everyone.”

Added De Rosario, “The way we came out, the way we pressured them all over the field, really limiting their play out the back and midfield, closing them down I thought we were a lot sharper than the last game. And most importantly we finished our chances.”

“I’m very happy about it,” said the captain. “I definitely want to thank the players. And Ricketts was the guy who went down to create that opportunity for me and thanfully I was able to finish it. Dale is a great player and he’s been a great role model for us in Canada. He’s held that title for a long time and to be along the same lines as that is a great feeling.”

Since Canada had already clinched its spot in the third round of World Cup qualifying with its draw on Friday, Hart tinkered with his lineup and the move with the most impact was Ricketts starting in place of Norwich City striker Simeon Jackson up front.

“I think he (Ricketts) deserves to play,” said Hart. “We weren’t sure how he would play if he starts, he always comes off the bench. But I thought it was a good game to give him an opportunity in front of his home fans and let him feel the pressure of the game a little bit and see how he responds and he was fantastic.

“Tosaint Ricketts stretched them a lot and gave room to the midfield so we could pass the ball better.”

De Rosario was also impressed with his teammate’s first start.

“He did very well,” said De Rosario. “He utilized the flanks and played some good balls in and he did a great job tonight, offensively and defensively. He couldn’t do more than we asked of him.”

After the match, Ricketts deflected questions about himself and talked about how well the team played as a whole.

“I think tonight there was just a little more passion — everyone was going,” said Ricketts. “We already qualified and everyone was still giving 100 per cent and that’s what I like to see in my teammates. And I thought it was a great game. I’m happy.”

Taking Advantage
The Canadians looked comfortable on its home pitch while the Kittians looked cold playing in 10 C weather as several of its players wore gloves during the match.

Canada came out fast and pushed the ball forward as St. Kitts struggled to keep the ball out of its own end of the field. In the early going, Tosaint Ricketts created numerous chances for the red and white, but goalkeeper Akil Byron was able to make easy saves.

The first quality chance actually came to the Caribbean nation in the 15th minute when Akil Grier got two attempts at goal. His first was blocked but the ball came back to him and he fired a shot off the left post. The ball bounced out to the right inside the six-yard box but luckily was cleared out of harm’s way.

Canada got on the board in the 27th minute when De Rosario, from a corner kick, passed to the top of the box where Johnson put the ball towards goal. Occean lunged forward and deflected the ball into the net to give Canada the 1-0 lead.

In the 33rd minute, St. Kitts defender Kareem Mitchum ran into Ricketts, muscling him down to the pitch inside the box and the referee immediately pointed to the spot. De Rosario calmly drove the ball into the left side of the net past a diving Byron to increase Canada’s lead to 2-0.

Canada turned the game into a rout with another goal in added time. Will Johnson’s corner kick was flicked in by Simpson just outside the six-yard box. Canada went into halftime with a 3-0 advantage.

Canada dominated the second half creating chance after chance as the Kittians looked tired and out of gas. But Canada could not get another goal until the 88th minute as Ricketts finally got a goal after playing a superb game up front. De Rosario’s shot was stopped by Byron but he was unable to hold onto the ball. Ricketts came sliding in and knocked the ball underneath the goalkeeper to complete the scoring.

With the win, Canada is now unbeaten in eight matches and finished 4-2-0 and atop Group C with 14 points. During the second round Canada scored 14 goals and conceded only one goal in six games. Canada also produced the second-longest shutout streak in Association history with five cleansheets.

Canada will play Cuba, Honduras and Panama in Group C next summer with the first game taking place on
the island nation on June 8. Canada will play its first home game four days later on June 12. Locations for all matches will be decided at a later date.

Hart will have a tough challenge selecting a squad for the next round, and won’t be able to look at his squad in action again until a friendly match in February.

“We knew this wasn’t going to be smooth sailing,” said Hart. “And now we have a squad…when players come back we have a lot of competition for places.

“Some young players showed today that they’re here to stay.”