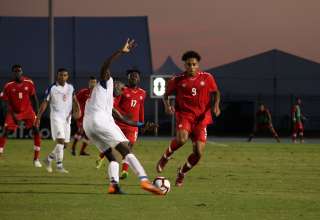 It had two sendings-off. Bad bounces. Time wasting. When Canada met Panama Tuesday at the CONCACAF U-20 Championship, well, the game was probably everything the cynical Canadian soccer fan would have expected.

Canada lost 2-1, with Panamanian keeper Marcos Allen making a spectacular save on a late second-half Mathieu Choiniere volley to preserve the win for the Central American side.

Under the new format for the U-20 Championships, where teams need to win their groups to advance, the loss to Panama all but buries Canada’s hopes to qualify for the U-20 World Cup. Canada will need to run the table and hope Panama coughs up points and goal difference against the other Caribbean minnows in the group.

(Note: That’s not going to happen.)

Panama played for nearly an hour with the man advantage, as Michael Baldisimo was sent off in the 24th minute for stomping on the ankle of Panamanian captain Victor Griffith. But, should Griffith had been on the pitch? Just minutes before, he saw only yellow after going through Choiniere with a two-footed, ahem, “tackle” from behind.

Griffith got the benefit of the doubt from Costa Rican referee William Arrieta Barrantes. But, when Baldisimo was the guilty party, he did not.

Panama capitalized just before the break, as Saed Diaz scored after pouncing on a ball in the penalty area after Canadian defender Daniel Kinumbe lost a challenge for a 50-50 ball and no other fellow defender stayed home in front of keeper Alessandro Busti.

Diaz hit the woodwork early in the second half, and, despite being down to 10 men, Canada got some life after that.

And, thanks to a bizarre back-heel flick in his own penalty area from Panamanian defender Soyell Trejos, the  ball was put on a tee for Noble Okello Ayo to find an equalizer.

But Panama got what would work out to be the winning goal on a bad bounce.

The grass fields on the soccer complex at Bradenton, Fla. are seeing game after game after game; and the wear on the natural surface is starting to show. You could argue, with a schedule like this, on so few fields, well the playing surface of choice should be artificial turf, not grass. Grass is wonderful when in good shape. When it’s in bad shape, well, the fake stuff starts to look pretty good. And, with a schedule like the U-20s are playing, you could fly Arsenal’s ground crew to Florida and they wouldn’t be able to keep the surface in really good shape.

The bad grass got the better of Canada. A harmless long-distance shot that Busti looked sure to capture took an awkward bounce off a divot and came up into the keeper’s face. The ball then caromed to Diaz, who scored his second off a nothing play.

But there would be another turn. In the 85th, Panama’s Jorge Mendez would see his second yellow for the most CONCACAF of all infractions; time-wasting. And, on a scramble after the ensuing free kick, Allen was called upon to heroically knock away Choiniere’s effort. He also stopped Theo Bair on the rebound, though it looked like, had Bair’s headed effort gone in, it would have been ruled out for offside.

The elephant in the room needs to be addressed, though. This was not Canada’s best U-20 selection. There are players like Alphonso Davies and Jonathan David who are playing with the senior national side. David is playing in Belgium, while Davies is about to join Bayern Munich. We can imagine “what if” those players would have been on the pitch for Canada.

The reality is that Canada needs a miracle, now. And Canada doesn’t have a rich history of getting miracles out of CONCACAF.