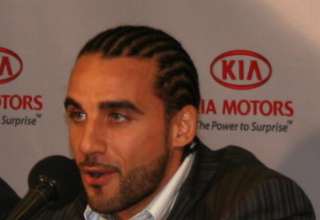 Dwayne De Rosario
Canada is used to being on the short end of controversial referees’ decisions at the Gold Cup. On Saturday, the calls went Canada’s way —helping Les Rouges to a tense 1-0 win over Guadeloupe in Tampa. Dwayne De Rosario converted a second-half penalty-kick attempt to give Canada a win in a game in which it held a man advantage for 86 minutes plus stoppage time. Canadian fans were howling over a lacklustre display over a country, well, that isn’t even a country. Guadeloupe belongs to France and isn’t even a FIFA member. But, soccer will always be painfully slow when played in temperatures of 33 C (before the humidity). And, well, this Canadian team has now done something that the Gold Cup-champion team of 2000 didn’t do — win a group stage-match. The 2000 team needed a coin flip-win to earn the right to get out of the group stage and into the knockout games. But no doubt, Canadian fans will be analyzing this group-stage game for days. Canada is now 1-1-0 with a date coming up in Kansas City against Panama. The goal came on a controversial call. Guadeloupe defender Stephane Zubar was yellow carded for grabbing Ali Gerba’s jersey in the area. Gerba, who had been ineffective as a starter, fell easily to the turf. The goal came in the 51st minute. It wasn’t the only call that went Canada’s way. Jean-Luc Lambourde saw red just four minutes in; as Will Johnson moved towards the top of the Guadeloupe penalty area, Lambourde emerged from his central defensive position and launched himself at the Canadian midfielder. He scissored Johnson and justifiably sent off for the late, rash challenge. The ref got the call right in this case — cynical Canadian fans who are used to being hard done by in the Gold Cup can at least celebrate that. But, with the man advantage, Canada was sluggish throughout the first half. Gerba took a pass from De Rosario and thumped the ball in the back of the goal off the volley, but the flag was up — and replays confirmed he was half a stride ahead of the last Guadeloupe defender when the ball was played. Gerba was onside, though, when he beat Guadeloupe defender Eddy Viator to a low cross from Josh Simpson in the 33rd minute. With the keeper at his mercy, Gerba didn’t make good contact as the ball skipped off the grass and the chance went begging. After the second-half kickoff, Guadeloupe forced Canadian keeper Milan Borjan, making his Gold Cup debut, into an outstanding diving save. David Fleurvial was given time and space to turn and shoot in the penalty area, and he lashed a mean drive towards Canada’s goal. Guadeloupe only lost 3-2 to Panama in their opening group stage game, despite being down to 10 men in that match, too. But, only minutes after the Borjan save, Canada got the penalty call. Simeon Jackson came on for De Rosario just after the one-hour mark. Rob Friend also came on for Gerba, who was ineffective and griping at teammates after he was an effective sub who created two fantastic chances in the opening-game loss to the United States. But that’s the thing about Gerba; there is no middle ground. He’s either very good or else a problem part of the team. His match ratings fluctuate wildly. It’s as if there were not one, but two Ali Gerbas — one who uses his size and power to his advantage, and makes the most out of his touches, and the other who always looks to blame teammates for their bad passes, who is always two steps too slow. Jackson tested the keeper with his first touch, a drive from well outside the box that was labelled for the top right corner, but keeper Franck Grandel did well to leap and tip over the bar. As the minutes ticked, the game moved to a walking pace in the stifling piece, but was brought to life in the 90th minute when Guadeloupe sub Livio Nabab came in with a flying, late challenge on Borjan — and then landed on the keeper’s head. Nabab was lucky to escape with only a yellow. Coach Stephen Hart was forced to go without regular midfielder Atiba Hutchinson and defender Marcel de Jong, both nursing injuries. Pedro Pacheco came on as a late sub, making his senior debut for Canada. It was a frustrating afternoon, one that has Canadian fans miffed. But it will be forgotten if Hart can manage to keep the squad fresh — which is really the big challenge of the group stage — so it can get a result against Panama.
Load More Related Articles
Load More By Steven Sandor
Load More In Uncategorized
Comments are closed.